It was a whirlwind week -- with an emphasis on the "wind" -- as we were a wind-swept bunch on Capitol Hill and now the Santa Ana winds are whipping here in Southern California! Made for some interesting air travel but happily I went there and back safely and am now back to "business as usual" -- whatever that means these days!

On a personal note, I note with GREAT pleasure that my son Jamie is happily "stateside" on leave from his unit in Iraq ... visiting with the "east coast Russells" this week and heading out to be with us next week. Thanks to all who've sent prayers and best wishes for his safety and travel ...

Most of this week was spent in Washington where it was a huge honor and privilege to be part of the "great cloud of witnesses" on Capitol Hill putting a faith-based-face on equality for ALL Americans. After our press conference in front of the Capitol (photos here ... video here) we spread out for visits with members and staffers. I was able to meet with my Congressional Representative, Adam Schiff and thank him for being an originating sponsor of the Local Law Enforcement Hate Crimes Prevention Act which should be on the House floor soon and urge support for ENDA (Employment Non-Discrimination Act) likely coming later in this session. 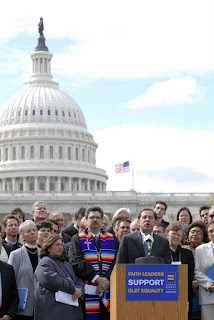 I was able to meet with my Congressional Representative, Adam Schiff and thank him for being an originating sponsor of the Local Law Enforcement Hate Crimes Prevention Act which should be on the House floor soon and urge support for ENDA (Employment Non-Discrimination Act) likely coming later in this session. 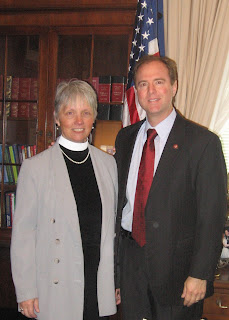 After meeting with staffers for several other California representatives we met with senior counsel for both Senators Boxer and Feinstein ... got lost several times in the maze of congressional office buildings ... were impressed with the good nature and extreme YOUTH of most of the folks working "on the hill" (sure I used to watch "West Wing" but it's different when you're sitting across the desk from folks who look hardly old enough to DRIVE much less run a country!) ... and had the wonderful opportunity to network with a fabulously diverse group of clergy from all over the country: all 50 states were represented and my hat is off to Harry Knox and the HRC Religion & Faith Department for pulling off a pretty spectacular event. (Photos can be found here ... video here.) 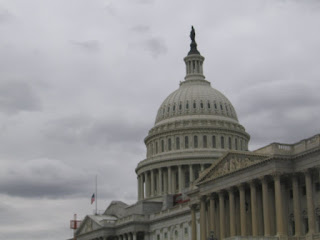 Of course our whole time in Washington was under the shadow of the unfolding tragedy at Virginia Tech and flags flying at half-staff. As I noted in a comment earlier on this blog, while we were deeply aware of the context in which we were ministering on Capitol Hill that day it was also an extraordinary opportunity to engage in pastoral conversations in elevators, security lines and cafeteria counters. I kept hearing the response from Morning Prayer echo in my head, "Only in you can we live in safety" as we prayed with each other and with volunteers, staffers and colleagues for an end to violence and for the hope of peace and justice for all.
.
"In other news" the Anglican World Kept Turning and Mark Harris and Fr. Jake kept blogging ... and there was good news in Oregon as the State Legislature passed bills designed to institute domestic partnerships and end discrimination.
.
Finally, it was a singular honor to have this little blog nominated for Best Religion Blog in something called the Blogger's Choice Awards (Who Knew????) Those so inclined can vote here ... and it's a particular honor to have been nominated by the illustrious Fr. Jake!!
Posted by SUSAN RUSSELL at 1:08 PM