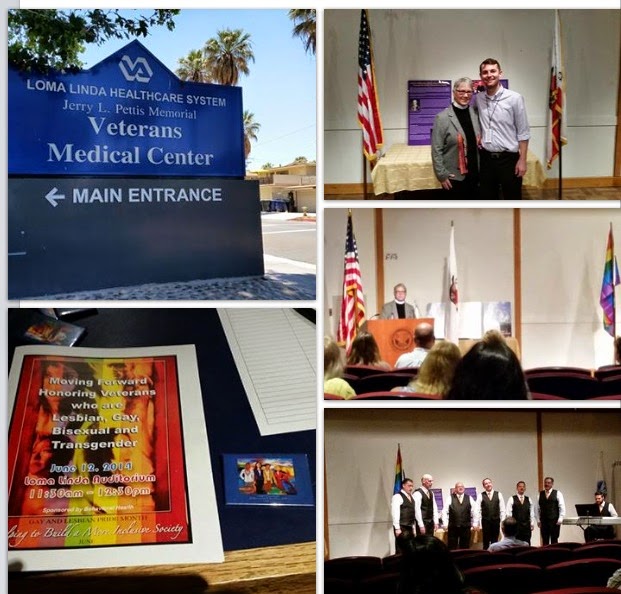 Twenty years ago, when I was in seminary in Claremont, I did my summer CPE (Clinical Pastoral Education) unit at Loma Linda Medical Center -- a unit which included rounds and on-call responsibilities at the VA Hospital.

It would arguably be very far down on the list of places I might have imagined being invited to give a keynote address at an LGBT Pride Month celebration -- but that's exactly what I did today.

It was a great gathering with music from an ensemble from the Gay Men's Chorus of Palm Springs, an update on the great work being done for LGBT veterans in general and transgender veterans in specific and it was an honor to be part of the program.

There was one moment that gave me pause, however. And that was the conversation with the VA staffer who apologized for having to edit the brief bio I sent them for the program. It seems they had to cut the "serves on the Clergy Advocacy Board for Planned Parenthood" line because -- wait for it -- it might be perceived to be "controversial."

That's right. We've gotten to the point where a lesbian priest giving a keynote address at an LGBT Pride Celebration in a Veteran's Administration Medical Center isn't controversial. But being supportive of Planned Parenthood is.

So let me make that TWO things I couldn't have imagined when I was doing CPE out in Loma Linda 20 years ago. Number One is that I'd ever be invited to give a keynote address at a Pride Celebration at a VA Hospital. Number Two is that in 2014 we'd still be fighting for women's reproductive rights -- and that being affiliated with Planned Parenthood would be too hot to handle for the Veteran's Administration. But being gay would be OK.