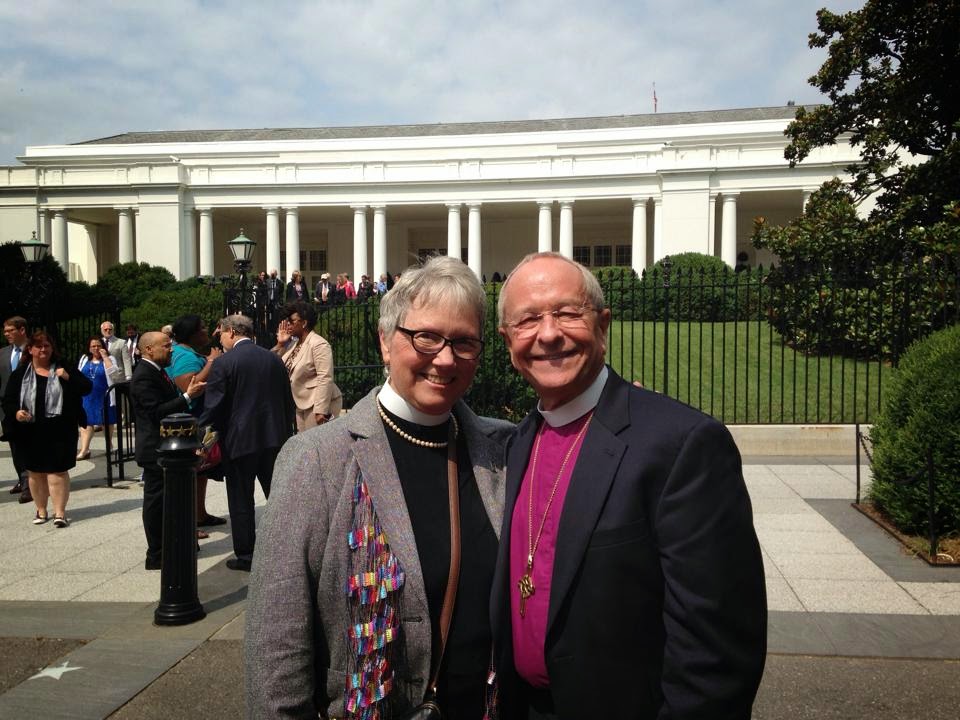 It was a HUGE and most unexpected honor to be invited to be the guest of the White House for the signing of President Obama's Executive Order on LGBT Workplace Discrimination. You can read about that part in the blog I wrote last week.

Here's my report back:

You know how sometimes you think something will be totally super cool to do and then when you do it you find out it really wasn't all that special?

This was not one of those times. 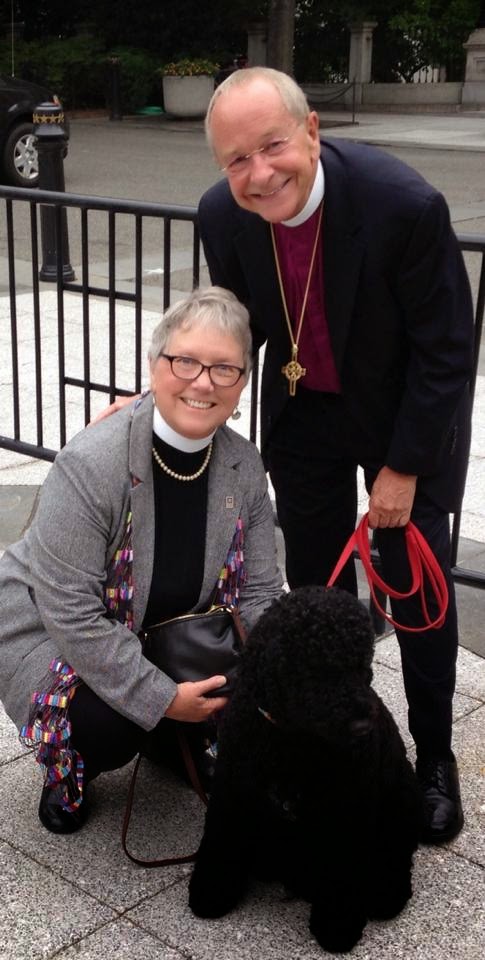 From getting to share the experience with my long-time friend and colleague Gene Robinson to linking up at the east gate of the White House behind one of my MSNBC favs Jonathan Capehart to getting to see the portraits of the First Ladies in the "ladies room" in the east wing to (wait for this one ... it's the best: getting to pet First Family Dog Sunny!) ... and then gathering with a true cloud of prophetic witnesses for LGBT equality in the reception room before the signing -- I mean seriously: it was JUST an amazing day and an incredible privilege to be part of it. (I'm probably going home with bruises from pinching myself!)

So you can see pictures I posted from the day here.
You can read my Huffington Post piece here.
And you can read my quote in Religion Dispatches here.

And finally -- thanks to the super efficient White House staff -- you can read the President's remarks (all 8 minutes of them!) below.

THE PRESIDENT:  Welcome to the White House, everybody.  I know I'm a little late.  But that's okay because we've got some big business to do here.

Many of you have worked for a long time to see this day coming.  You organized, you spoke up, you signed petitions, you sent letters -- I know because I got a lot of them.  (Laughter.) And now, thanks to your passionate advocacy and the irrefutable rightness of your cause, our government -- government of the people, by the people, and for the people -- will become just a little bit fairer.

THE PRESIDENT:  It doesn’t make much sense, but today in America, millions of our fellow citizens wake up and go to work with the awareness that they could lose their job, not because of anything they do or fail to do, but because of who they are --  lesbian, gay, bisexual, transgender.  And that’s wrong.  We’re here to do what we can to make it right -- to bend that arc of justice just a little bit in a better direction.

In a few moments, I will sign an executive order that does two things.  First, the federal government already prohibits employment discrimination on the basis of sexual orientation.  Once I sign this order, the same will be explicitly true for gender identity.  (Applause.)

And second, we’re going to prohibit all companies that receive a contract from the federal government from discriminating against their LGBT employees.  (Applause.)    America’s federal contracts should not subsidize discrimination against the American people.

Currently, 18 states have already banned workplace discrimination based on sexual orientation and gender identity.  And over 200 cities and localities have done the same.  Governor Terry McAuliffe is here; his first act as governor was to prohibit discrimination against LGBT employees of the Commonwealth of Virginia.  (Applause.)  Where did Terry go?  Right back here.

I’ve appointed a record number of lesbian, gay, bisexual, and transgender public servants to positions across my administration.  They are ambassadors and federal judges, special assistants, senior advisors from the Pentagon to the Labor Department.  Every day, their talent is put to work on behalf of the American people.

Equality in the workplace is not only the right thing to do, it turns out to be good business.  That’s why a majority of Fortune 500 companies already have nondiscrimination policies in place.  It is not just about doing the right thing -- it’s also about attracting and retaining the best talent.  And there are several business leaders who are here today who will attest to that.

And yet, despite all that, in too many states and in too many workplaces, simply being gay, lesbian, bisexual or transgender can still be a fireable offense.  There are people here today who’ve lost their jobs for that reason.  This is not speculative, this is not a matter of political correctness -- people lose their jobs as a consequence of this.  Their livelihoods are threatened, their families are threatened.  In fact, more states now allow same-sex marriage than prohibit discrimination against LGBT workers.  So I firmly believe that it’s time to address this injustice for every American.

Now, Congress has spent 40 years -- four decades -- considering legislation that would help solve the problem.  That's a long time.  And yet they still haven’t gotten it done.  Senators Terry [Tammy] Baldwin and Jeff Merkley are here.  They have been champions of this issue for a long, long time.  We are very proud of them.  I know they will not stop fighting until fair treatment for all workers is the federal law of the land.  Everyone thanks them for that.  (Applause.)

But I’m going to do what I can, with the authority I have, to act.  The rest of you, of course, need to keep putting pressure on Congress to pass federal legislation that resolves this problem once and for all.

For more than two centuries, we have strived, often at great cost, to form “a more perfect union” -- to make sure that “we, the people” applies to all the people.  Many of us are only here because others fought to secure rights and opportunities for us. And we’ve got a responsibility to do the same for future generations.  We’ve got an obligation to make sure that the country we love remains a place where no matter who you are, or what you look like, or where you come from, or how you started out, or what your last name is, or who you love -- no matter what, you can make it in this country.

That’s the story of America.  That’s the story of this movement.  I want to thank all of you for doing your part.  We've got a long way to go, but I hope as everybody looks around this room, you are reminded of the extraordinary progress that we have made not just in our lifetimes, but in the last five years.  In the last two years.  (Applause.)  In the last one year.  (Applause.)  We're on the right side of history.

I’m going to sign this executive order.  Thank you, everybody.  (Applause.)

(The executive order is signed.)

[Am SO jealous, Susan, that you got to pet Sunny. And, oh yeah, be w/ Gene Robinson, Jonathan Capeheart, and, oh yeah, THE PRESIDENT! ;-p]