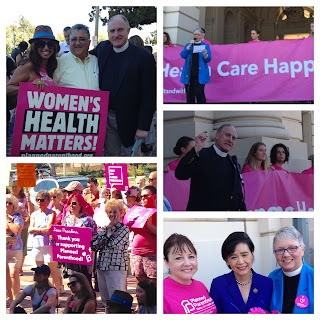 The day after Congress voted to cut funding for Planned Parenthood, I stood with hundreds of Planned Parenthood supporters -- including Pasadena Mayor Terry Torneck and Congresswoman Judy Chu -- in a rally at Pasadena City Hall. Here's more or less what I said -- as posted to the Huffington Post.

I am a priest, a pastor and a proud member of the member of the Planned Parenthood Clergy Advocacy Board - made up of interfaith clergy and faith leaders from around the country committed to protecting reproductive freedom for women -- something which is quite literally at risk in our nation today. For me, supporting Planned Parenthood is a religious liberty issue.

Religious liberty - as you've no doubt heard in the news - is under attack in this nation. It is under attack by those who confuse exercising their religion with imposing their religion - and in the process are confusing their theology with our democracy. My religious liberty as a Christian is only as protected as the religious liberty of every other person of every other faith -- and yes, that includes the liberty of those who choose "none of the above." And all of our liberty is threatened when the religion of any American citizen is misused to undermine the constitutional protections of any other American citizen.

And that's why I believe it is so critically important for people of faith to speak out AS people of faith when access to health care for women is turned into a bargaining chip in a game of political brinkmanship. It is our responsibility to stand up when the core American value of religious liberty is hijacked as a weapon of mass disinformation in a campaign to undermine a woman's constitutional right to make choices about reproductive health care. And that is why we are here today to Stand with Planned Parenthood.

I am also a mother - the mother of two sons - and one is a veteran of the wars in Iraq and Afghanistan. Before they put their lives on the line for their country, he and his colleagues took an oath to "defend the Constitution against all enemies, foreign and domestic." And not long ago he said to me: "Mom, it never occurred to me that Congress would be one of those enemies."

My thirty-three year old Army veteran son gets it. The majority of Americans get it. And we need to keep raising our voices until Congress gets it, too.

Because I'm a preacher, I want to close with two brief theological points. The first comes from the Ten Commandments - which inform the faith of Christians, Jews and Muslims across this nation. You may - or may not - remember that one of the ten is "You shall not bear false witness" - and if Moses was coming down from Mount Sinai today those tablets might include "... or make false videos that fraudulently misrepresent the work of Planned Parenthood - or anybody else for that matter."