The Vagenda of Manocide 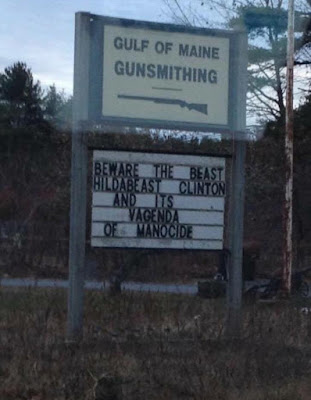 No, that's not a typo. That is a direct quote from this sign spied on the campaign trail and now making the rounds on Twitter.

"Beware The Beast: Hildbeast Clinton And Its Vagenda Of Manocide."

Seriously. I couldn't make it up. It's evidently the brainchild (and yes -- I use the term loosely) of a dude who's kinda famous in his parts for outrageous stuff like this -- at least according to TheDailyDot.com.

It is hard to even wrap your brain around -- much less image a response to -- such overt misogynistic absurdity. Which is precisely why you need to get ready for the best part.

Guess what happens if you go to VagendaOfManocide.com? Seriously. It's an actual URL. Check it out.


That's right. It's a Donate to Hillary Clinton for America page.

Someone on the HRC staff was smart, savvy and with it enough to snatch up the URL and do the Genesis 50:20 thing -- turning what was intended for harm as a means to accomplish good.

I don't know about you but that kind of creativity and agency gives me hope that when we make it through these last days of the longest election cycle in the history of voting we're going to have smart, savvy, with it people in charge -- people who are committed to moving us forward into a future where we really are #StrongerTogether rather than #PolarizedToPieces.

In the meantime, I'm hearing rumors that the next hot Feminist Thrash Metal Band is going to be calling itself The Vagenda of Manocide. You just might have heard it here first.