On Equality, Protest & the Truth that will set us free 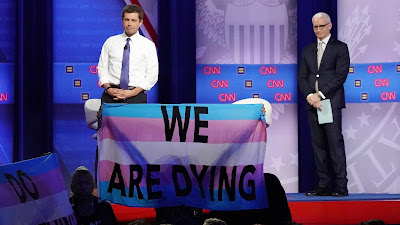 On Thursday, October 10 in Los Angeles an auditorium packed with LGBTQ community members in specific and supporters of equality in general gathered to hear nine of the Democratic candidates for President field questions about their hopes and dreams for our nation at a town hall entitled "Equality in America."

At exactly the same time in Minneapolis, an enthusiastic crowd gathered to hear Donald Trump make his case for "Making America Great Again" by continuing the policies he has advanced during his three years in office.

The Los Angeles crowd heard a diverse field of competitors for the presidential nomination in their party address how they would work to both reverse the steps backwards during this administration and move to take steps forward toward the goal of full equality for LBGTQ Americans. Representing different generations, cultural and geographic contexts, ethnicities, genders and orientations they offered a hopeful, forward looking vision for a nation living out its aspirational ideal of a nation conceived in liberty and dedicated to the proposition that all people are created equal.

The Minneapolis crowd heard the President of the United States attack a sitting member of Congress, a former Vice-President of the United States, the Speaker of the House, refugees in general and Somali refugees in particular. In a rally described by the Washington Post as "Stunning in ugliness and tone" he offered conspiracy theories, obscenities and character assassination directed at his opponents and a vision for a nation continuing on the path he has chartered during his administration ... a path notable for its chaos and corruption at home and abandonment of historic allies while embracing dictators and oligarchs abroad.

I was honored to be in the audience here in Los Angeles for the Equality Town Hall ... sitting amongst a great cloud of witnesses in the balcony above the candidates and questioners. There were a number of moments that stuck out for me: Elizabeth Warren's brilliant response to the question about marriage and connecting our trade policy to advocacy for human rights, Pete Buttigieg so artfully navigating questions about his faith, and the universal support of all nine candidates for Equality Act.

But the most powerful ones were the moments when the carefully orchestrated agenda was disrupted by transgender rights protesters calling for an accounting for the ongoing murder of black trans women in the streets of our nation. In a statement after the event, HRC President Alphonso David apologized saying, "Black and Latin trans women should not have to protest to have a voice in spaces created for the LGBTQ community."

Their pain was palpable, their voices were strong and the justice they seek is irrefutable. None of us are free and safe and home until all of us are -- and the marginalization of black trans women as the story of the LGBTQ movement's past is told and as the future of the LGBTQ movement is shaped is undeniable.

Their courage in standing up and speaking out challenged all of us to continue to live into the aspirational vision of a nation where liberty and justice for all really means all.

And in that moment, they also provided the candidates and moderators the opportunity to offer a vision for what public civic discourse looks like when we amplify rather than vilify voices of protest; when we live into the best of who are are as a diverse nation still striving to become the nation we were conceived to be; when we are willing to listen to those whose experience is not ours in order to become partners in dismantling oppression.

The greatness of America lies in the power of protest to continue to challenge its leaders to live up to the promise of greatness we have yet to fully realize … and in the willingness of Americans to be transformed by the witness of the stories, the pain and the struggle of those with the courage to speak their truth in order to set us all free.

Because -- as the radical rabbi from Nazareth taught us in John 8:32 … "the truth will set you free."