Nobody Is Electable Until We Elect Them 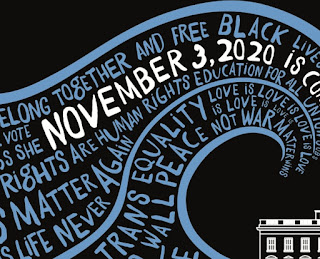 It is the eve of the New Hampshire primary. We are months away from November 3, 2020 -- arguably the most important General Election in our lifetimes -- with the Iowa Caucus Debacle still in the rear view mirror and the most ubiquitous question on every platform, in every interview and from every pundit discussing the Democratic field is "Which candidate is the electable one?"

And that question is inevitably followed by a laundry list of reasons why every single candidate is unelectable ... sending shivers of fear down spines and inspiring pearl clutching immobilization on the part of a large percentage of the still-traumatized by 2016 Democratic electorate.

And since I've personally been guilty of all of the above, I wanted to take a minute to share this twitter exchange that snapped me out of it. 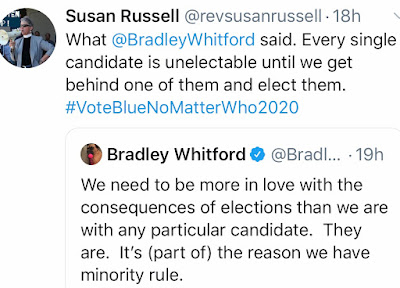 The antidote to being immobilized over the question of which candidate is the electable one is to be more in love with the consequences of the upcoming election than with any particular candidate. To let the primary process play itself out. To campaign for, give to and support the candidate of your choice and then campaign for, give to and support whoever the nominee ends up being. Ignore the pundits and click bait and doomsayers and pearl clutchers. Focus on organizing, mobilizing, unifying ... and hydrating.

Remember 2018 and the Midterms. Remember there are more of us than there are of them and undivided we really are a Blue Wave that can be the change we want to see. But most of all, remember that every single candidate is unelectable -- until we get behind them and elect them.

Posted by SUSAN RUSSELL at 8:15 PM