Again with The Coming Out Story 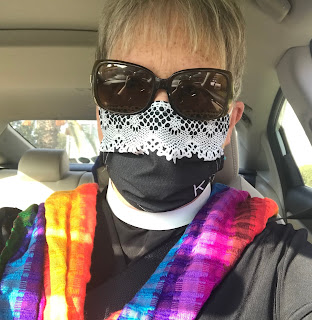 The music was glorious, the lessons inspiring and the privilege of receiving Holy Communion at the altar in this amazing “house of prayer for all people” as we celebrated the birth of a nation dedicated to “liberty and justice for all” was an amazing gift I will always remember.Oh … and I came out.In the cathedral. On the Fourth of July. In the middle of festival Eucharist I had the great “aha” moment – the epiphany – the “I-shoulda-had-a-V8” realization that the God who had “fearfully and wonderfully” made me had made me gay. And called me to priesthood. And told me “now, go back and be the priest I called you to be.”That’s my coming out story. I’ve told it many times before but on this “Coming Out Day” it seemed worth telling again. It seemed worth reminding myself – and anybody else who wants to listen in – that I did not come out from the fringes of anything but from what former Presiding Bishop Frank Griswold famously called "the diverse center."I came out in the context of a spiritual journey that began with my baptism at St. Paul’s Cathedral in Los Angeles in 1954 (go ahead and do the math!) and continued through Junior Choir, confirmation class, Altar Guilds and Vacation Bible Schools, ECW Boards, teas and luncheons, Diocesan Conventions, vestries and parish day school boards and finally seminary, ordination and parish ministry.My coming out had nothing to do with a political act. It had nothing to do with a genital act. It had to do with recognizing that I could not be fully present at altar if I was not fully present in myself – and it had to do with being raised in a church where +John Hines taught me that “justice is the corporate face of God’s love,” +Ed Browning told me that in the Episcopal Church there would be no outcasts and the consecration of +Barbara Harris incarnated for me the hope that this church was actually willing to live into its high calling to live out a radically inclusive gospel.So Happy “Coming Out Day” to me – and to the scores of LGBTQ Episcopalians like me. Are we a challenge to the wider church? I hope so. And I hope we continue to be. I hope that our voices of faith and witness will continue to preach, to protest and to prophesy – that we will stand in the temple and tell the Good News of God in Christ Jesus made present in our lives, our vocations and our relationships. That we will preach that Good News in and out of season.And here's to our core American values of liberty and justice for all and to everyone committed to our core Episcopal values of respecting the dignity of every human being. Not because we’re politically correct but because we’re gospel obedient -- and because we're going to do whatever we can to offer a rebuttal to the rabid rhetoric of the religious right who have taken the Good News of God’s inclusive love and distorted it into a weapon of mass discrimination. Of humiliation. Of homophobia.
Because the stakes are too high. Because the damage to precious souls is too costly. And because the truth that there are people of faith who proclaim justice and compassion — not judgment and condemnation — is too important not to step up and speak out. As Harvey Milk said “You must come out ... and once and for all, break down the myths, destroy the lies and distortions.” And for me as a Christian, those lies and distortions include hijacking my faith and turning it into weapon to wound God’s beloved LGBTQ children.

So Come Out, Come Out wherever you are. Come Out as proud LGBTQ members of the rainbow tribe. And if you happen to be the Christian variety, then Come Out as a Christian, too. Break down some myths. Destroy some lies and distortions. And if we do it long enough and loud enough and together enough eventually we will be done. And October 11th will roll around and nobody will need to Come Out because there won’t be any closets left.
And wouldn’t that be fabulous?
Posted by SUSAN RUSSELL at 11:48 AM