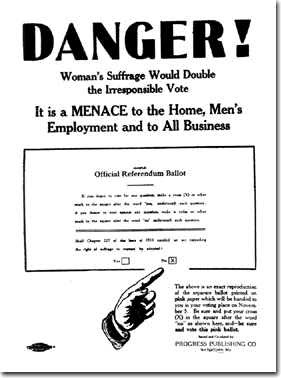 Fredrica Harris Thompsett described a historian as "a person who backs up a thousand years or so to get a running start on the questions at hand." In this case, historian Christine Stansell only had to back up 90 years or so for this op-ed in Tuesday's New York Times.

A Forgotten Fight for Suffrage
By CHRISTINE STANSELL -- Chicago

LOOKING back on the adoption of the 19th Amendment 90 years ago Thursday — the largest act of enfranchisement in our history — it can be hard to see what the fuss was about. We’re inclined to assume that the passage of women’s suffrage (even the term is old-fashioned) was inevitable, a change whose time had come. After all, voting is now business as usual for women. And although women are still poorly represented in Congress, there are influential female senators and representatives, and prominent women occupy governors’ and mayors’ offices and legislative seats in every part of the United States.

Yet entrenched opposition nationwide sidelined the suffrage movement for decades in the 19th century. By 1920, antagonism remained in the South, and was strong enough to come close to blocking ratification.

Proposals for giving women the vote had been around since the first convention for women’s rights in Seneca Falls, N.Y., in 1848. At the end of the Civil War, eager abolitionists urged Congress to enfranchise both the former slaves and women, black and white. The 14th Amendment opened the possibility, with its generous language about citizenship, equal protection and due process.

But, at that time, women’s suffrage was still unthinkable to anyone but radical abolitionists. Since the nation’s founding, Americans considered women to be, by nature, creatures of the home, under the care and authority of men. They had no need for the vote; their husbands represented them to the state and voted for them. So, in the 14th Amendment’s second section, Republicans inserted the word “male,” prohibiting the denial of voting rights to “any of the male inhabitants” of the states.

In the ensuing decades, the nation backpedaled from the equal-rights guarantees of the 14th and 15th amendments. Black voters in the South were refused federal protection, and even in the North and West, literacy tests and educational requirements were used to turn immigrants and laborers away from the polls. The suffrage movement itself embraced anti-immigrant and anti-black views. In 1903 in New Orleans, at their annual convention, suffragists listened to speakers inveigh against the Negro menace. Black suffragists met far across town. (An elderly Susan B. Anthony paid them a respectful call.) It was the nadir of the women’s movement.

Later in the first decade of the new century, though, an influx of bold young women, allergic to the old pieties about female purity and comfortable working with men, displaced their moralistic, teetotaling elders. Black women, working women and immigrants joined white reformers in a stunningly successful coalition. From 1909 to 1912, they won suffrage in Oregon, California and Washington. More states followed, so that by the 1916 presidential election, 4 million new votes were in play.

“Antis” still managed to defeat suffrage measures in four Northern states that year. “Woman suffrage wants the wife to be as much the ruler as the husband, if not the chief ruler,” warned one antagonist. But such views were waning — everywhere but the South.

President Woodrow Wilson, who had been a genteel but firm anti-suffragist, was indebted to female voters for helping him win a close election, and in 1918 he endorsed a constitutional amendment. That year the 19th Amendment passed the House. It stalled in the Senate — blocked by conservative Southerners — but Wilson muscled it through in 1919.

Thirty-six of the 48 states then needed to ratify it. Western states did so promptly, and in the North only Vermont and Connecticut delayed. But the segregated South saw in the 19th Amendment a grave threat: the removal of the most comprehensive principle for depriving an entire class of Americans of full citizenship rights. The logic of women’s disenfranchisement helped legitimize relegating blacks to second-class citizenship.

Female voters would also pose practical difficulties, described bluntly by a Mississippi man: “We are not afraid to maul a black man over the head if he dares to vote, but we can’t treat women, even black women, that way. No, we’ll allow no woman suffrage.”

Nine Southern states joined by Delaware forced ratification to a halt, one state short. Only Tennessee was left, and the opposition had good reason to think it would line up with the rest of the region. But after a nine-day special session in the heat of August 1920, a legislator pledged to the nays jumped ship — he later said it was because his mother told him to — and the 36th state was in.

Even then, in several Southern states, die-hards went to court to invalidate the amendment, stopping only after the Supreme Court in 1922 unanimously dismissed their arguments.

In 1923 Delaware ratified belatedly to join the rest of the country, but the Southern states waited decades: Maryland in 1941, Virginia in 1952, Alabama in 1953. Florida, Georgia, Louisiana, North Carolina and South Carolina came along from 1969 to 1971, years after the Voting Rights Act of 1965 had passed. Mississippi brought up the rear, not condoning the right of women to vote until 1984.

Today the country is again divided over how far the rights of citizenship extend. In the controversy over same-sex marriage, the prospect of constitutional protection calls up truculence from one part of the country, approval from another. How remarkable, then, that a parallel conflict — one that similarly exposes the fears and anxieties that the expansion of democracy unleashes — is now largely lost to memory.


Christine Stansell, a professor of history at the University of Chicago, is the author of “The Feminist Promise: 1792 to the Present.”
Image from the Historical Society of Wisconsin
Fredrica Harris Thompsett quote from page 30 of "We Are Theologians"
Posted by SUSAN RUSSELL at 9:46 AM

Heterosexism against GLBT people is just a variant of sexism against women. Thanks for the reminder of the giants on whose shoulders we stand.