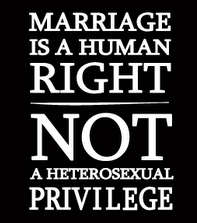 Marriage equality is 3 for 3 in the courts with today's 9th Circuit Court denial of an en banc rehearing in the case.

What next??? From Prop 8 Trial Tracker:

Now that en banc rehearing was denied, the proponents have 90 days to file a petition for certiorari to the Supreme Court, seeking review of the decision striking down Proposition 8. It’s likely that Justices at the Supreme Court would have their conference to take up the petition and decide whether to grant review or not sometime after their summer break in October. Oral argument would follow a few months later, and then a final decision would be issued by June or July 2013.

No one is certain if the Supreme Court would grant review of the case as it currently stands. Judge Reinhardt’s opinion for the three-judge Ninth Circuit panel is very narrow and the holding is specific to California’s unique legal circumstances. A denial of rehearing in this case leaves the decision California-specific and there may not be four Justices – the number needed to grant certiorari – who want to visit an issue that’s so limited in scope. On the other hand, the panel’s decision did strike down an amendment to a constitution of an enormous state involving a contentious issue. And allowing gay couples to marry in California would nearly double the amount of people in the United States who live in an area that allows same-sex marriage.

That's what the Prop8 Trial Tracker folks had to say. Here's what I had to say:

Today’s ruling by the 9th Circuit Court moves us another step closer to restoring marriage equality in California. Here at All Saints Church in Pasadena we would be delighted if the injunction was lifted so that we could once again equally offer God’s blessing and civil protections to all the couples in our congregation. June, after all, is the quintessential month for weddings and we would be thrilled to be back on the right side of history in struggle for marriage equality sooner rather than later. Whenever the decision for equality comes, however, we are convinced it will come because we trust that the arc of history does bend toward inclusion – and believe that today’s court decision helped bend that arc just a little closer toward ending the shameful chapter of discrimination against same-sex marriage in California.

Stay tuned.
Pray for Peace and Stand for Justice.
Posted by SUSAN RUSSELL at 12:35 PM