Musings from the multi-platform vacation front 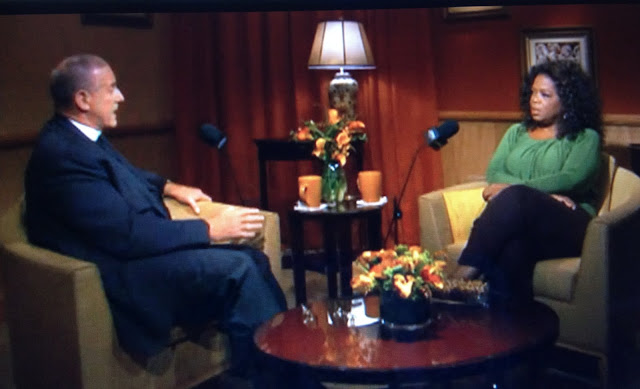 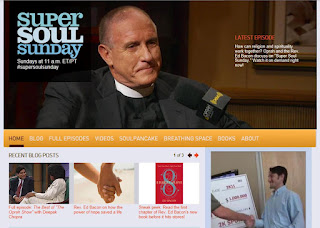 So my rector -- Ed Bacon -- was back on Oprah this morning. It was a reprise of an interview he'd done earlier on her radio network ... only this time they ran it as part of the "Super Soul Sunday" series along with a whole cool live-streaming/tweeting thing.

It made for a very multi-platform morning at my house.

Yes, I'm on vacation. But -- as I commented to a Facebook friend who commented on my comment about the Oprah airing -- I'm on vacation, not in isolation. And so of course I'm still interested in what happens when Ed's on Oprah talking about turning the human race into the human family ... especially when I can watch from my couch in my jeans on my laptop with the Dodgers whooping the Braves on the television. (Go, Blue!)

If you want to catch the Oprah segment, you can still watch it here. And, of course, I commend it to you. You'll hear about turning the human race into the human family, about the power of forgiveness, and about what grits and grace have in common. Basically, you'll hear what we hear every Sunday at All Saints Church ... and how delighted was I that Oprah -- who I kind of think of as "the gift that keeps on giving" -- gave us ... gave Ed ... gave the message of God's love, justice and compassion ... a bigger platform this morning.

Oh, I know. The Oprah Winfrey Network isn't getting the ratings the old Oprah Show days used to pull in and who knows what difference Ed holding forth on television makes, anyway -- there's no slot in the parochial report for "how many viewers did you reach with the Good News of God's inclusive love" on television this week. How do you quantify the impact? Will it help your pledge base?

Now, Lord knows I don't have all the answers. I don't even pretend to. I'm a Baby Boomer, "digital immigrant," still-figuring-it-out-as-I-go-along bystander to a whole new world of communication and networking opportunities, possibilities and challenges.


But here's what I do know:
Also in the news today? Pat Robertson arguing against international adoption, with these decidedly not WWJD words: “… all these various children, blended family, what is it – you don't know what problems there are. I'm serious. You don't have to take on somebody else's problems. You really don't.” (So much for Matthew 19:14 and suffering little children to come to Jesus. Oy vey!)

And then there's the "traditional values" candidate for Senate in Missouri -- Todd Akin -- who opined this morning that there is no such thing as pregnancy from "legitimate rape" since (wait for it ...) "If it's a legitimate rape, the female body has ways to try to shut that whole thing down." Talk about taking "blame the victim" to a whole new level -- Seriously!

Of course Akin is backing off that statement now ... as well he should. But if ever there was a news day that illustrated how badly the we need alternative voices speaking about the values of love, justice and compassion -- what Ed calls the "habits of love" in his upcoming book -- then it was today.

So I'm having a GREAT vacation. Thanks for asking. Yesterday it was a trip to the Farmer's Market -- some great live Bluegrass music followed by great Italian food with good friends. Today it was Dodger baseball and Ed on Oprah. And who knows what tomorrow will bring? I'll keep you posted.
Posted by SUSAN RUSSELL at 4:46 PM

As my sainted mother used to opine,

"What in billy-blue hell" is 'legitimate rape? What legitimizes it anyway?

I watching my dvr of Ed & Oprah when my neighbor can in and whatever he was going to say he just sat down, and was just rapt - fixated - didn't speak or look away intil a commercial came on. I was lost until I found All Saints There was "nohting in church for me" until a woma who was canvassing for Obama came to my door - we chatted quite awhile, she told me about her church - I didn't releay believe her - but I did check it out and found a wonderful message and that y'all don't just talk the talk but also walk the walk and it's not just the folks on the altar - but also the people in the pews and at the tables on the lawn and in the forum. I really get that people at All Saints (me too) really believe that God dwells in each of us, and that they (we) strive to SEE God in each other let the people say "Amen" !

I watched and was most inspired by this wonderful Good News! Thanks for the post on this.