On Saturday August 4th the Diocese of New Hampshire gave the Church of God a new bishop when they consecrated Robert Hirschfeld as their bishop coadjutor. The picture below is from the AP report from Saturday's consecration -- the commentary below that is from a member of St. Paul's in Concord NH) 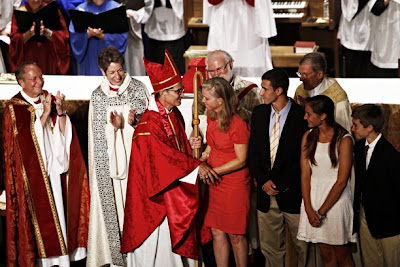 WE'VE CHANGED THE WORLD
by Cherie Konyha Greene / For the Concord Monitor August 4, 2012

The Episcopal Diocese of New Hampshire is about to consecrate a new bishop coadjutor, the Rev. Rob Hirschfeld. Since New Hampshire has no cathedral, we'll be doing it in the Capitol Center for the Arts in Concord. It's going to be the sort of grand occasion you might expect from a church body with British roots. You know - the culture that brought us the opening ceremonies to the 2012 Olympics.

Well, okay. This is New England, after all. The presiding bishop won't be parachuting onto Main Street; her flight from Washington will land at an airport. (Let us pray that Voldemort doesn't show up, because I'd really hate to see the Very Reverend Katharine Jefferts Schori floating in on an umbrella.) We won't get Paul McCartney, but we do have music composed for the occasion by music director Nicholas White of St. Paul's School, sung by a 90-some-voice choir.

Our 300-strong Parade of Parishes will have heraldic banners and clergy draped with hand-quilted red stoles. No glowing owls on bicycles, but we've got this dove-shaped kite on a pole that flutters over everyone's heads, which is pretty cool. Our torch-bearers won't be running, but there will be incense. There will also be plenty of big words like "coadjutor" that date to the time of Henry VIII.

We love this stuff in the Anglican Communion. We had those things at the consecration of our current bishop, Gene Robinson. Aside from being held in a theater instead of the University of New Hampshire hockey stadium, this ceremony shouldn't be much different. Except:

This time around, we probably won't have to run a gauntlet of angry protesters on our way into the ceremony. I doubt the Concord police will have to sweep the Capitol Center for explosives. It is highly unlikely that anyone will stand up during the liturgy and describe intimate bedroom matters in graphic detail. Odds are, this bishop will be able to stir his coffee without bumping into a CNN camera. In fact, the soon-to-be Right Reverend Rob might not even need a bulletproof vest under his vestments.

It happens that the newly elected bishop is a heterosexual.

This mere fact means that the world might go back to leaving New Hampshire alone, outside of presidential primary season, which doesn't make much more sense to New Hampshire Episcopalians than the toxic, global kerfuffle that arose from Robinson's election. Flatlanders expressed amazement that "conservative" New Hampshire had taken such a "radical" step, but it was completely in harmony with our state motto: Live Free or Die.

We voted for Robinson because he was a hardworking, dedicated priest who understood us. We simply thought he was the best man for the job, and we were right. Under his leadership, New Hampshire has been energized to be a beacon of God's love to the world.

People outside the state know Gene as "the first gay bishop," which is, of course, laughably inaccurate. He's just the first one to be elected while being completely honest about his committed relationship with another man, and he has been a model of transparency and integrity throughout his tenure. We would have happily kept him on for many more years had he not announced his retirement to the Diocesan Convention on Nov. 6, 2010.

I was saddened to read that he had, as I feared, cited "death threats, and the now-worldwide controversy" among the reasons. I remember when they announced Robinson's election at St. Paul's Church. After the standing ovation, parishioners considered what might happen next. Many said, "It's only New Hampshire. We're a small diocese; who's going to notice what we do?" As part of the Episcopal Church U.S.A., we're not very big. Compared with the worldwide Anglican Communion, we're barely a blip. So who was going to pay attention?

Well, the next day, faced with an onslaught of frantic protests from more conservative parts of his flock, Archbishop of Canterbury Rowan Williams could only say, "Let's all take a deep breath." The British are good at not freaking out.

Unfortunately, not all Anglicans and Episcopalians are British, and the freaking out soon began in earnest. It culminated in Robinson being asked not to come to England for the worldwide Anglican Communion's conference, because if the bishop from our small diocese showed up, entire continents were likely to bolt. I guess they noticed.

I wonder, though, whether they noticed something else. There was a quiet miracle growing here, sending out shoots across the country. Robinson noted, in that same 2010 address, that people "who have been ill-treated, in the name of a judgmental God, and who have left the Church . . . because religion tells them they are an abomination," are now hearing "a different story" of unconditional love.

Our incoming bishop Rob Hirschfeld took a stand for marriage equality in his previous parish. We picked him because that bell we rang back in 2003 is not going to be un-rung. We're going to keep ringing it. Little New Hampshire, the diocese without a cathedral, the place we didn't think anyone would notice, has changed the world.

(Cherie Konyha Greene is a writer and a member of St. Paul's Episcopal Church in Concord.)
Posted by SUSAN RUSSELL at 10:35 PM