Lent One and The Temptation of Scriptural Literalism 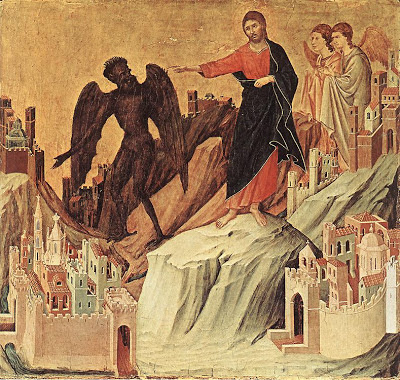 
Jesus, full of the Holy Spirit, returned from the Jordan and was led by the Spirit in the wilderness, where for forty days he was tempted by the devil. He ate nothing at all during those days, and when they were over, he was famished. The devil said to him, "If you are the Son of God, command this stone to become a loaf of bread."


Jesus answered him, "It is written, 'One does not live by bread alone.'"


Then the devil led him up and showed him in an instant all the kingdoms of the world. And the devil said to him, "To you I will give their glory and all this authority; for it has been given over to me, and I give it to anyone I please. If you, then, will worship me, it will all be yours."


Jesus answered him, "It is written, 'Worship the Lord your God, and serve only him.'"


Then the devil took him to Jerusalem, and placed him on the pinnacle of the temple, saying to him, "If you are the Son of God, throw yourself down from here, for it is written,


'He will command his angels concerning you, to protect you,' and 'On their hands they will bear you up, so that you will not dash your foot against a stone.'"


Jesus answered him, "It is said, 'Do not put the Lord your God to the test.'" When the devil had finished every test, he departed from him until a more opportune time.


I can’t even begin to estimate how many times I’ve heard and/or preached this Gospel According to Luke appointed for the First Sunday in Lent … and yet this year I had one of those “heard it again for the first time” experiences with it.


And what I heard – for the first time – is that the third temptation … the one that sends the devil off to wait for “a more opportune time” … is arguably the Temptation of Scriptural Literalism.


Seriously. Check out the passage above.


In the first two challenges, Jesus responds with quotes from Scripture: “One does not live by bread alone” and “Worship the Lord your God, and serve only him” – and the devil is stumped.


It is in the third one that the pattern changes.


This time it is the devil who leads with Scripture – trying to tempt Jesus to jump off the temple with: “For it is written 'He will command his angels concerning you, to protect you” and “On their hands they will bear you up, so that you will not dash your foot against a stone.”


And while Luke records Jesus’ answer as “Do not put the Lord your God to the test” what I also heard his year was “Dude! You’re not supposed to take this stuff literally! These Scriptural texts are powerful metaphorical language for the love of God that so palpably surrounds us that even in times of trial, challenge and danger we can dare to risk all for the Good News of God’s love, justice and compassion, knowing that nothing can separate us from that love and from its source. This isn’t about jumping off a roof, for Pete's Sake – it’s about changing the world! Now get out of here – I’ve got work to do.”


And there it is. After decades of reading, marking, learning and inwardly digesting this Gospel According to Luke, on this First Sunday in Lent 2013 I was struck with the divine irony that when the devil had run out of other temptations, he turned to Scriptural Literalism in his last ditch effort to keep Jesus from his appointed rounds as the rabble rousing rabbi from Nazareth.


I am confronted with how that pattern has continued in the church over the last two thousand years as it has succumbed over and over again to the temptation to confuse the Living Word of God with the Literal Words of God and has let the devil tempt it into using the Scriptures as weapons to defend the Institutional Church rather than as tools to build the Kingdom of God.

And I am convinced that we can do better than that. Just as Jesus refused to let the devil tempt him with Scriptural Literalism in the 1st century wilderness, we must resist the same temptation in the 21st – because it makes no more sense now than it did then to take the Living Word of God and misuse it as the Literal Words of God. Jesus knew that – and when he called the devil on it, the devil had no option but to “retire until a more opportune time.”


May God give us the grace – and the wisdom and courage – to go and do likewise. Because God knows we've got work to do!
Posted by SUSAN RUSSELL at 3:53 PM

First - how does your logic not invalidate Jesus's renunciation of the Devil by citing Scripture the first two times?

Second - I looked up the actual citation that Jesus was referring to. It's most of Deuteronomy 6:16 - "Do not put the Lord your God to the test as you did at Masseh." The "test" at Masseh (Exodus 17:1-7) was when Israel doubted the Lord and quarreled about following his directions in the face of adversity, even wondering if He was not among them. Reading the chapters show that Jesus was referring to an explanation of why we must follow God's commands, stipulations and decrees if we are to enjoy His favor and protection.

To have done what the Devil tempted Him to do would have challenged God by going counter to His plan for Jesus - a plan that Jesus, uniquely among beings, actually knew. The rest of us don't, so we are commanded to follow God's "commands" and "stipulations and decrees". Jesus wasn't challenging following God's word literally - He was emphasizing it.

First ... Because Jesus was using Scripture to explain what the Kingdom of God is supposed to look like.

Second -- following God's commands -- love God and love your neighbor as yourself are the ones upon they all hang -- is not the same as confusing the Living Word of God with the literal words of God.