The Equality Act: In Celebration of Incremental Victories 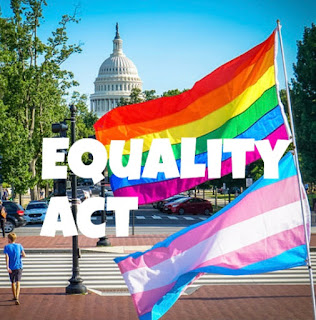 This morning I got to watch some history happen.

By a vote of 236-173 the United States House of Representatives passed H.R. 5 ... AKA "The Equality Act" ... which amends the Civil Rights Act to prohibit discrimination on the basis of sexual orientation and gender identity in employment, housing, public accommodations, public education, federal funding, credit, and the jury system.

Basically it would move us forward as a nation to a place where the constitutional guarantee of equal protection for all Americans would finally equally protect LGBTQ Americans.

Of course we're not "there yet."

The Equality Act now heads to the Senate where in spite of evidence of some bipartisan support it faces an uncertain future in the hands of Majority Leader who will be loathe to bring it to a vote and a GOP majority hell-bent destroying whatever shred of integrity is left in the Republican Party. (The sound you hear is my GOP Daddy rolling in his grave.) Not to even mention the current resident of the White House who would never sign it.

Nevertheless ... this morning I got to watch some history happen.

I got to watch the House of Representatives prove that they can indeed both investigate and legislate. In the words of Representative Jerrold Nadler (NY) the chairman of the Judiciary Committee: “The question before us is not whether the LGBTQ community faces outrageous and immoral discrimination, for the record shows that it clearly does. The question is whether we, as Congress, are willing to take action to do something about it. The answer goes straight to the heart of who we want to be as a country — and today, that answer must be a resounding ‘yes.’”

And while there are many who have been in trenches far longer than I have been, I couldn't help remembering when we stood on Capitol Hill in 2005 opposing the Federal Marriage Amendment ... and carried baskets full of postcards from constituents as we made our "clergy calls" on Congress ... captured in this image on an HRC postcard: a time when a vote like today's was hard to even imagine. 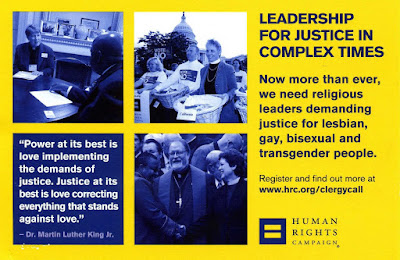 In the years since then there have been countless other times we have suited up, shown up and spoken up as people of faith to offer a rebuttal to the rabid rhetoric of the religious right.

The point of our witness is not to change the hearts and minds of those who already have them made up because "the Bible said it, they believe it and that settles it." (Although that would be awesome.)

The point of our witness is to remind our legislators that good people of faith can and do come to different conclusions on a whole variety of questions about what God blesses or doesn't bless; approves of or doesn't approve of; sanctions or doesn't sanction.

The point of our witness is to make sure they know that there are Christians like us and our congregation members who support full equality for LGBTQ Americans -- not in spite of their faith but because of it.

In the days, weeks and months ahead there will be plenty of opportunities to suit up, speak up and show up as people of faith to continue the work of bending that arc of history toward justice. And we will do that. But today is a day to celebrate an incremental victory in the journey toward the audacious goal of liberty and justice for all.

And then we'll get back to work. La lucha continua ... the struggle continues!

Posted by SUSAN RUSSELL at 4:41 PM