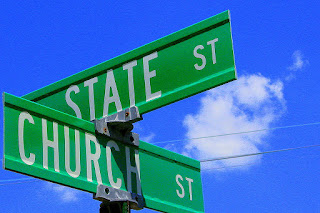 Religious liberty is trending on Twitter today — and not in a good way.

This morning the White House – on the National Day of Prayer – announced a new rule allowing health providers, insurers and employers to refuse to provide or pay for services that they say violate their religious beliefs.

It is yet another a battle in the war we have been fighting for decades – and whether the debate was about achieving marriage equality or ending employment discrimination … whether the issue was LGBTQ equality or women’s reproductive rights … it has seemed that someone, somewhere has been giving impassioned testimony about how their religious liberty is under attack.

The First Amendment protects us from any laws “impeding the free exercise of religion” thus guaranteeing that each and every American has the liberty to believe — or not believe — absolutely anything he or she chooses about what God wills or intends, blesses or condemns. It also — thank God — protects the rest of us from any other American imposing those beliefs on us.

And when it comes to providing medical treatment, no American should be denied access to the services or procedures they need because another American has their theology confused with our democracy.

“Religious liberty is a fundamental right, but it doesn’t include the right to discriminate or harm others,” said Louise Melling, deputy legal director at the American Civil Liberties Union. “This rule threatens to prevent people from accessing critical medical care and may endanger people’s lives. … Medical standards, not religious belief, should guide medical care.”

The First Amendment is already doing its job protecting our religious liberty. This morning’s action from the White House is yet-another step down the slippery slope from democracy to theocracy having nothing to do with increasing freedom and everything to do with paving the way to discrimination. It must be challenged.
Posted by SUSAN RUSSELL at 3:06 PM