It was a random post on my Facebook page I could have just scrolled by but decided to read -- an RNS piece entitled "Beth Moore's ministry reignites debate on whether women can preach." 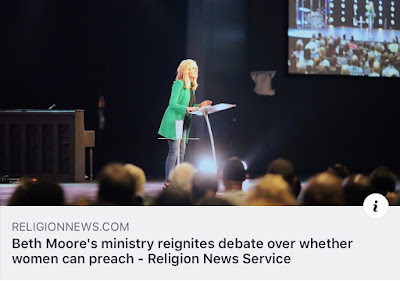 You can read it all here ... but this was the quote that got me started:


“There’s just something about the order of creation that means that God intends for the preaching voice to be a male voice,” said R. Albert Mohler Jr., president of Southern Baptist Theological Seminary in Louisville, KY.

Since this is the kind of toxic patriarchal bull sh** that literally makes my head want to explode, I decided to reach out via this open letter. Not because I expect Mr. Mohler to read it. But because -- as one FB commenter noted -- "Whether he reads it or not I feel better that it is out there." So here goes:

There's just something about systemic sexism that means you are utterly blind to the projection of your own unexamined male privilege onto God that ends you up with a worldview where unless it sounds like you it isn't God. Which is scary-close to idolatry. Which I suggest you Google if you need a refresher.

And ... while I've got you ... it's only a hop-skip-and-a-jump from there to the place where when the only allowable image of God is a Dysfunctional Daddy with an Anger Management Problem ... and then we are gobsmacked that anybody who calls themself a Christian and strives to follow the radical rabbi from Nazareth who called us to love our neighbors as ourselves and do all good things unto the least of these supports the draconian programs and polices of the current resident of the White House.

So just a hard no, Al. This has nothing to do with "the order of creation" and everything to do with the toxin of unexamined privilege. And we have an app for that. It's called #TheResistance.

God bless and Peace Out.

Your Friend (and fellow preacher),
(The Reverend Canon) Susan Russell

Posted by SUSAN RUSSELL at 3:20 PM