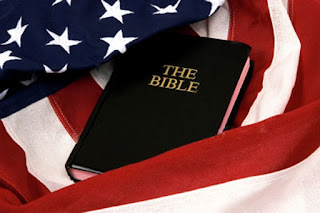 This smart, concise and compelling apologetic for enlightened biblical scholarship offers a compelling challenge to the misuse of scripture as a blunt instrument against science, reason and interfaith peacemaking. Deep bows of gratitude to Bishop John Taylor for writing it and for giving permission to share it. Please read ... and then go and do likewise.

Most of us are used to it. Have you ever told a post-denominational friend that you’re an Episcopalian only to have them reply, “I’m a Christian”? Like the faint echo of the Big Bang in the cosmos, the anti-Catholic, anti-sacramental suspicions of the 16th century Reformation still trouble the body of Christ. With thousands of denominations and sects, ours is a rich but fractured mosaic. It’s vital to be tolerant of one another’s styles of worship and interpretations of Holy Scripture.

But when idiosyncratic beliefs put people’s lives at risk – when fake Good News ends up as bad foreign policy, as it has in the Trump administration -- it’s time for progressive denominational Christians speak up on behalf of one of the greatest gifts to people of faith: Enlightened biblical scholarship.

Many insist that the Bible, especially in the Revelation of John, predicts events such as the creation of the state of Israel and Russia’s intervention in the Syrian civil war. The theories fall under the broad category of Dispensationalism. Because of the “Omen” movies and “Left Behind” novels, many in society and the media, whether believers or not, may think it’s the only way to read the good book.

But we denizens of EfM (Education for Ministry), weekly Bible study in our parishes and missions, and seminary know the real sacred story. The texts themselves say nothing about these or any historical event that occurred after they were written, edited, and accepted as sacred canon in the fourth century. We know this and more thanks to analytical tools that scholars, interpreters, and teachers have had at their disposal for a century and a half or more.

The techniques are taught at all mainline seminaries and informed the preaching Buttigieg grew up hearing. They help us understand that Revelation was written late in the first century not to predict events in 2019 but to inspire and encourage churches in Asia Minor as the Roman Empire was persecuting Christians. Torah wasn’t the work of one author, Moses, but of many writers and editors, finalized seven centuries after the events the texts recount. Isaiah comprises the work of a succession of prophetic witnesses working across 200 years or more.

This doesn’t mean the Bible isn’t the inspired word of God. A Christian can believe in the birth, teachings, and resurrection of Jesus Christ without insisting that the world was created in six days, as Genesis recounts, or that Jonah survived inside a big fish. With all my lay and ordained siblings in the church, I believe the Bible contains all things necessary for salvation. But it can take a lifetime of discerning study to appreciate fully its foundational values of righteousness, peace, justice, and, above all, love.

Many theologically conservative Christians read scripture with modern minds, plumbing its verses for life lessons instead of clues about the Apocalypse. Denominational and evangelical Christians could discover some common ground by creating settings to study and debate the Bible together, perhaps someday healing centuries of schism and uniting behind Jesus’s commandment to love God and love one another as ourselves.

But Dispensationalist Bible interpretations are potentially deadly when politicians like Donald Trump permit them to inform their policy decisions. As recently documented in the riveting WGBH podcast “The End of Days,” so-called Christian Zionists consider the emergence of Jerusalem as the undivided capital of Israel to be a pivotal step toward the end times. Evangelical preachers’ and voters’ demand that Trump move the U.S. embassy from Tel Aviv to Jerusalem was a classic self-fulfilling prophecy. It did considerable damage to what remains of the Israel-Palestine peace process, in which most experts agree the status of Jerusalem should be settled last.

It could get far worse if U.S. policymakers keep implementing Christian Zionist Bible study lessons. Many want Israel to annex the West Bank so its borders would match those of Bible times. The result could well be the disenfranchisement of millions of Palestinian Arabs, turning Israel into a true apartheid state.

They also favor building a third temple in Jerusalem, with animal sacrifices and all, which would require destruction of Muslim holy sites on the Temple Mount – again, to fulfill what they believe the Bible specifies on the way to the end of days. Should the U.S. ever encourage such steps, a catastrophic regional war could indeed result, all because politicians were in the thrall of those who claim that it’s actually Pete Buttigieg who misreads the Bible and disrespects Jesus.

Trump’s policies signal that it’s long past time for progressive denominational Christians and our dialogue partners in other faith traditions to reclaim the ineffable, irreducible, love- and justice-infused richness of our shared scriptural inheritance – and then make some foreign policy demands of our own. Here’s one for starters. Whoever replaces Trump should promise that they’ll dial the doomsday clock back a few millennia, not to mention reinvigorate the peace process, by moving the U.S. embassy from Jerusalem back to Tel Aviv. You with me, Mayor Pete?

Written by the Right Reverend John H. Taylor,  Bishop of Los Angeles, this post originally appeared in the 2019 early summer edition of "The Episcopal News" and is shared with permission from the author.
Posted by SUSAN RUSSELL at 9:42 AM