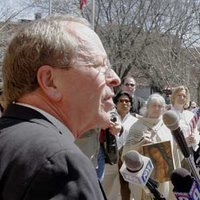 From The Southern Voice

Bishop Gene Robinson of New Hampshire told gay Republicans April 28 that 'it would make God very happy' if they seek fair and equal treatment. Robinson, who spoke April 28 at the Log Cabin Republicans National Convention in Washington, D.C., said the struggle for gay rights ultimately is a struggle for inclusion.

He challenged members of the nation's largest gay GOP group to seek fair and equal treatment in society, in politics and in church.

Robinson echoed other convention speakers — including Alan Duncan, the first openly gay Conservative in the U.K.'s Parliament — who criticized the GOP push for a constitutional amendment banning gay marriage.

"The notion that my love for my partner somehow undermines another person's marriage is just idiocy," he said. "Isn't it?"

Duncan, who spoke April 29, said U.S. laws shouldn't be "ideologically driven." He condemned leaders of the GOP in the America, who are generally ideological brethren with his own Tory Party in the U.K., for maintaining an "unholy alliance with the Religious Right."

"It's the duty of the state to intervene when two people hate each other," he said, "not when they love each other."

He called the effort silly, and cited it as the latest example of how the political influence of evangelical Christians is hurting the GOP.

Danforth, a Missouri Republican and an Episcopal priest, said history has shown that attempts to regulate human behavior with constitutional amendments are misguided.

"Once before, the Constitution was amended to try to deal with matters of human behavior; that was prohibition. That was such a flop that that was repealed 13 years later," Danforth said.
Referring to the marriage amendment, he added that perhaps at some point in history there was a constitutional amendment proposed that was "sillier than this one, but I don't know of one."

The Senate is scheduled to vote in June on a constitutional amendment that its supporters hope will head off any decision in the federal courts that could legalize gay marriage.

The measure would need to be approved by two-thirds of those voting in the House and Senate and then be ratified by at least 38 state legislatures.

But Danforth said he is opposed.

"The basic concept of the Republican Party is to interpret the Constitution narrowly, not expansively, so that legislatures, and especially state legislatures, can work out over a period of time the social issues in our country," he said.

Log Cabin also honored retiring Congressman Jim Kolbe (R-Ariz.) at the April 29 event, which capped off the group's annual convention — perhaps the last for longtime LCR President Patrick Guerriero. Kolbe, who is openly gay, is completing his 11th term in the House representing a district near Tuscon.

Kolbe called on Log Cabin members to stand up for gay rights, both at home and around the world. A video tribute for Kolbe featured Vice President Dick Cheney and House Speaker Dennis Hastert (R-Ill.).

The Associated Press contributed to this report.
(File photo by Jim Cole/AP)
Posted by SUSAN RUSSELL at 12:20 PM