Finding "no desire" to vote TEC off the Anglican Island, +Anis Throws in Tribal Council Torch 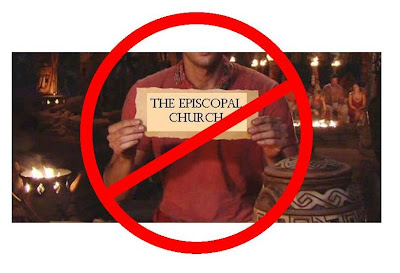 In his letter dated January 30, Archbishop Mouneer Anis resigned from the Standing Committee of the Anglican Communion, saying:

I have come to the sad realization that there is no desire within the ACC and the SCAC to follow through on the recommendations that have been taken by the other Instruments of Communion to sort out the problems which face the Anglican Communion and which are tearing its fabric apart. Moreover, the SCAC, formerly known as the join Standing Committee (JSC), has continually questioned the authority of the other Instruments of Communion, especially the Primates Meeting and the Lambeth Conference.

You can read the whole letter (on the PDF linked above) but the Clif Notes version is "We're not having any luck voting the Episcopal Church off the Anglican Island so I'm quitting the Tribal Council."
.May the good bishop go in peace to love and serve the Lord ... and leave the rest of us to get on with the work and witness we've been given to do.
.(PS - Remember this when the well-meaning-but-misinformed-among-us try to use "the Anglican Communion will split" as a reason not to consent to the election of a certain bishop suffragan-elect from the Diocese of Los Angeles. "Survivor: The Anglican Communion" is off the air. TBTG!)
Posted by SUSAN RUSSELL at 12:54 PM

You bet we've questioned these so-called Instruments of Communion, three of which do not include the laity or deacons/priests. The question is: now that he has resigned where will he go and what will he do? I doubt he's disappearing into the great void.

I suggest you read the entire letter, not just your selected phrase(s). But I guess that's how you read the Bible so I shouldn't be surprised.

Unknown said...
This comment has been removed by the author.
9:10 AM

What John said ... What IS your point, Cyndee? Inquiring minds want to know ...

Sorry for the double-post.

Call me old-fashioned, but I think there really IS a difference between telling someone they're not welcome at the table because of who they are and disagreeing with someone who hasn't been asked to leave.

Not that anyone who just can't stand our company isn't free to go elsewhere.

Her point's at the top of her head, Susan.

That's the only point people like her will ever have.

Sorry it took awhile to respond. The reasons for the resignation were that his presense in SCAC has no value as his voice is not heard (so much for listening process). Many won't speak up due to financial concerns (they need TEC money).
There is no desire within the AC & SCAS to follow through on recommendations made by the other Instruments of the Communion (rules don't apply unless the TEC says they apply).
Participation in the decision making process that affects the life of the communion should not be for those who turn their back on every appeal and warning (TEC).
Orthodox voices are disregarded or suppressed (again, great at the listening process - only those with your views have a right to be heard).
Note Section 3 where he indicates we should love, welcome & pastorally care for those of homosexual orientation (I don't read that as meaning he means to exclude the LBGT).
SCAC did not apply the recommendations of the Windsor Report of the Primates Meetings in Dromantine & Dar es Salam.
So, he didn't leave because he didn't get his way but due to the exclusion of Orthodox voices due the the money (power) of TEC.

Cyndee ... Still not buying it. The voices of "the orthodox" have not been excluded ... they've just not beeen agreed with. The decision to NOT kick TEC off the Anglican Island because we have moved forward with the fuller inclusion of the LGBT baptized does not in any way, shape or form exclude anybody. It annoys them. It pisses them off. It offends them. But it doesn't exclude them.

Adults work through their differences. Children take their toys and go home. It's time for the whole church to grow up and get on with the mission and ministry of the Gospel ... and although it's sad that +Mouneer Anis isn't willing to work with those he disagrees with on these issues, in the long run it's a positive step forward for the whole Communion that the SCAC and ACC are refusing to be blackmailed into blackballing anyone.

As you wish. Treating their arguments as rational has not worked so far, but I admire your dogged determination that everyone is basically good-willed.

Thankfully, you'll have people like me when that turns out to be untrue. Every Dumbledore needs a Snape.

In other words, Cyndee is bent out of shape over queers in the church.