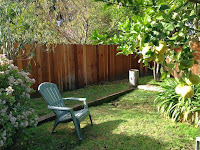 So I'm thirteen days in to three months of sabbatical leave and I think it's finally starting to sink in that my assignment is NOT to work. At least not to work at what I usually spend all day working at. The idea that your "task" is to rest -- to recreate -- to sabbath -- is profoundly countercultural. But I'm trying.

Reading. (Just finished Jay Johnson's "Peculiar Faith" and about to start a Barbara Kingsolver novel.) Resting. Walking. (Only a mile a day so far but hey ... it's a start.)"Recreating."(We took a family trip to Nevada to visit Lori's mom and today I took an online Star Wars quiz to find out what character I would be. Princess Leia, in case you wondered. AND I'm caught up on Downton Abbey. If that's not "recreation" I don't know what is!) Also doing some much deferred closet organizing, silver polishing, photo sorting ... the kind of stuff you tell yourself you'd do if you had time. And now I have time so ...

I'm also mulling my writing project ... what I'm calling a "narrative history of the Episcopal Inclusion Wars." So far all I've done is assemble a very impressive pile of resources: old news clippings, photos, agendas, liturgies, conference handouts and the like. I've made plans to go to New York in February for the 2014 Episcopal Urban Caucus and my intent there is to start picking some brains and bringing some other folks into the work ... with a goal of starting to write in early March. I'll keep you posted

In the meantime, I've got the elbow room to stay pretty connected with the unfolding marriage equality saga -- notably today's ruling from the 9th Circuit Court:


[W]e are required by [U.S. v.] Windsor to apply heightened scrutiny to classifications based on sexual orientation for purposes of equal protection….[T]here can no longer be any question that gays and lesbians are no longer a ‘group or class of individuals normally subject to ‘rational basis’ review.’” As a result, the court explained, “when state action discriminates on the basis of sexual orientation,” a court “must examine its actual purposes and carefully consider the resulting inequality to ensure that our most fundamental institutions neither send nor reinforce messages of stigma or second-class status.

Lambda Legal will give you all the details over on their blog ... and you should totally go there and read all about it. As for me, I've got about another hour of daylight so think I'm going to take the dogs outside and see if I can talk one of them into chasing a ball. Not exactly their strong suit but hey ... we're on sabbatical kids! Let's give it a try ...
Posted by SUSAN RUSSELL at 4:29 PM