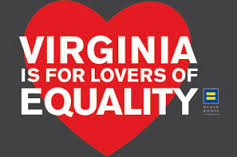 
The Court finds Va. Const. Art. I, § 15-A, Va. Code §§ 20-45.2, 20-45.3, and any other Virginia law that bars same-sex marriage or prohibits Virginia's recognition of lawful same-sex marriages from other jurisdictions unconstitutional. These laws deny Plaintiffs their rights to due process and equal protection guaranteed under the Fourteenth Amendment of the United States Constitution.

U.S. District Judge Arenda L. Wright Allen wrote that the constitutional right to equality should apply to all, including same-sex couples seeking marriage licenses. "Our Constitution declares that 'all men' are created equal. Surely this means all of us," wrote Allen, an Eastern District of Virginia judge in Norfolk. "While ever vigilant for the wisdom that can come from the voices of our voting public, our courts have never long tolerated the perpetuation of laws rooted in unlawful prejudice. One of the judiciary's noblest endeavors is to scrutinize law that emerge from such roots."Allen stayed her order to allow an appeal, meaning nothing immediately changes for same-sex couples in the state.

Read the rest in the Huffington Post.
Posted by SUSAN RUSSELL at 9:49 PM

I live right on the line in Bristol TN and VA. I can't wait for this ruling to go in effect the portion of the area that I live in is very conservative. I think that the area will benefit economically. More people will come and spend money in the area because the see the state as more justice and a place they would rather live.