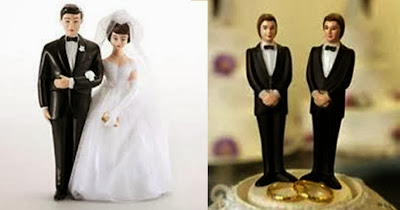 Ed & Hope: Forty-three years ago today a kid from south Georgia married the gorgeous love of his life on his 23rd birthday. Together they raised two amazing children and made the journey from south Georgia to Southern California -- via Mississippi. Their mutual commitment to love, justice and compassion has called them into leadership on issues of justice and inclusion and their inspiration has been a key component of sustaining the work for full inclusion for LGBT people in the Episcopal Church and beyond.  They have touched countless lives through the incarnational witness their lives have given to the inclusive love of God made manifest in their individual careers as healers and hope-givers and in their marriage as an icon of that love.

Jason & Tim: Ten years ago today, Jason writes, "We woke up at 4:00 AM to drive to San Francisco and seize what we thought might be our one and only opportunity to get married. With our families and friends attending in person and by phone, we said our (weepy) vows surrounding by dozens of other couples who also just wanted a chance to have their love recognized. The state invalidated the SF marriages six months later and it wasn't until 2008 that we had a chance to make it legit, but we still think of this one as our 'real' wedding." Today they are raising two amazing boys -- a nine year old and a five month old -- and have chosen to live their lives publicly as a witness to the family values of unconditional love, commitment and mutual respect. Their witness has touched countless lives offering hope to LGBT people by showing that the dream of a life of love, marriage and family is attainable -- and offering healing to those who continue to "evolve" in the process of overcoming the toxic narratives of internalized bias against LGBT people.

At the 2000 General Convention of the Episcopal Church we adopted Resolution D039, which reads in part:

Fourteen years later, the world around us has changed dramatically. The states embracing marriage equality are growing by leaps and bounds as the arguments supporting the relegation of same-sex marriages to second-class status are growing hollower day by day.

What has NOT changed -- dramatically or otherwise -- are the standards we in the Episcopal Church expect those marriages to be characterized by. Fidelity. Monogamy. Mutual Affection and Respect. Careful Honest Communication. Holy Love.

What we need are more marriages like that. Marriages that stand the test of time. Marriages like Ed and Hope. Like Jason and Tim. And like all those others we hope we'll be hearing from and about as the Task Force for the Study of Marriage continues to do its work in the weeks and months ahead.

But for now ... here's to love. Here's to marriage. Here's to Ed & Hope and to Jason & Tim -- and to all others who celebrate the love that brought them and keeps them together. Here's to the source of that love -- the God who is the source of all love and the ground of all being. And -- while we're at it -- here's to Valentine's Day. (I'll have the dark chocolate, please!)

Posted by SUSAN RUSSELL at 2:00 PM