My two word argument for Hillary in 2016 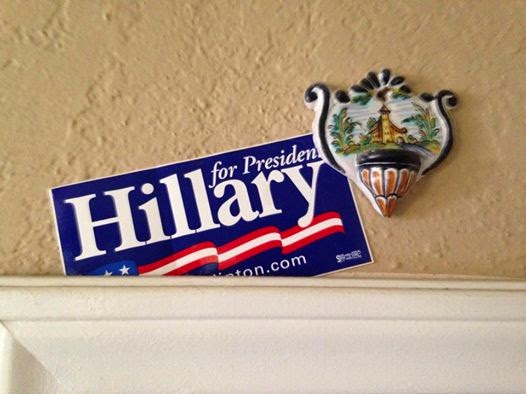 My late wife Louise put this on the top of the bookshelf in the living room when Hillary conceded to Obama in the 2008 primary -- and said it was going to stay there until we needed it in 2016. And it's been there ever since.

And for those who will argue (and they will) that Hillary is too old, too conservative, too liberal, too unelectable, too Wall Street, too hawkish, too much whatever or not enough something else here's my two word argument for why we get behind her. And those two words are: Supreme Court.

In 2016, four of the nine justices will be aged 80, 80, 78 and 74. If we don't want to condemn this country to a Court that will take away women's reproductive freedom, threaten civil and voting rights and continue to empower corporations over citizens -- not to even mention undermine LGBTQ equality -- then we suck it up, put on our big girl/boy panties and support the ticket. (Or that thing you hear go bump in the night may just be Louise. Wouldn't put it past her!)