On Torture, Violence and Faith 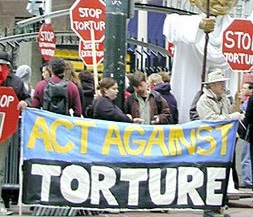 This was going to be a morning “off."
And then I read the news.

President Bush said Saturday that he has vetoed legislation meant to ban the CIA from using waterboarding and other harsh interrogation tactics because it "would take away one of the most valuable tools on the war on terror." In his weekly radio address, Bush said, "This is no time for Congress to abandon practices that have a proven track record of keeping America safe."

Retired Army Lt. Gen. Harry E. Soyster, a former director of the Defense Intelligence Agency, suggested that those who support harsh methods simply lack experience and do not know what they are talking about. "If they think these methods work, they're woefully misinformed," Soyster said at a news briefing called in anticipation of the veto. "Torture is counterproductive on all fronts. It produces bad intelligence. It ruins the subject, makes them useless for further interrogation. And it damages our credibility around the world."

Episcopal Café offers this from author Bruce Chilton, an Episcopal priest and chaplain at Bard College, who writes of human sacrifice in an excerpt from his new book, Abraham's Curse:
As Judaism has praised the sacrifice of Abraham, and Islam the offering of Ibrahim, Christianity since the first century has contended that Jesus accomplished in action the offering that Isaac only symbolized. The key Christian belief in Jesus as the sacrificial Lamb of God reinterprets and recasts the image of Isaac in Genesis.

Abraham's story has never been ours more than it is now. Naming the compulsion to take innocent life in the belief that sacrifice is noble goes beyond the incidents of any single crime, and takes us into the foundations of human culture and of how people understand the divine.

We live on the edge of a prolonged sacrificial commitment, in a war on terror whose end is as obscure as its purposes and whose methods are ill defined. Understanding what it is we're talking about when we speak of human death as a "sacrifice" has become crucial to us.
.
Read the rest of Chilton’s essay here …

From Me:
.
And now, I believe, there has come a time when we as Christians must examine our own history of oppression, our core doctrines of domination and our unexamined metanarratives sanctifying violence.
.
It may not be safe -- particularly in a nation willing to gut its Constitution in the interest of "national security."
.
It may not be politic -- particuarly in Presidential Politics Season
.
It may not be popular -- particuarly if you're going to challenge historically "key Christian beliefs" such as Jesus as the sacrificial Lamb of God in a Communion where the tail of doctrinal conformity threatens to wag the dog of Anglican "unity."
.
It may be none of these things but it is the right thing to do and it is the right time to do it. Before another pre-emptive war is waged in our name. Before another LGBT teenager is gunned down in our schools. Before we allow one single solitary more act of violence to go unchallenged.
.
It is the right thing to do. And it is never too late to do the right thing.
.
Posted by SUSAN RUSSELL at 11:07 AM

...the most important question is, "Do the ends justify the means?" In the mind of George W. and the members of the religious right, the answer is of course, YES.

I see no value getting to the desired destination having traveled a road left littered with so much human wreckage. Human dignity and personal integrity are not items to be wore or cast off at one's whim.

Doing the next right thing is not easy. It requires courage. And courage is not the absence of fear, it is what one does when faced with their fears. Standing up and saying, "ENOUGH!' does not come without a price but silence is incalculably costly. I pray for the voice that others may hear. I pray for the innocents. I pray that hardened hearts melt into a sea of humanity.

Very well put, Susan, thank you for linking this Administration's ill-conceived plans to the story of Abraham and Isaac. It's one of my favorite stories, and Samuel Barber's duet depicting it among his greatest works. I pray for a President who will overturn policies permitting torture, if not for our country's sake, then for the sake of our soldiers captured in battle.