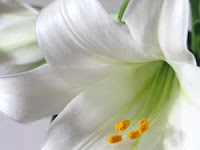 The Easter Glow is starting to fade. The Easter dress is off to the cleaners, the lilies are browning around the edges, the ears are off the chocolate bunny and we're down to the jelly beans at the bottom of the basket that nobody likes.

In the church office we're still in recovery mode ... after Easter Monday off (which seems like a great idea on Easter Monday) now we're digging through our desks getting to everything we were going to get to "after Easter" and wondering how it got to be Wednesday already.

For me, that list included not only writing thank you notes to all who worked so hard to make our Holy Week and Easter liturgies such wonderful celebrations of God's abundant love but also getting caught up on the episodes of "As the Anglican World Turns" I missed while off in Holy Week Land.

In the Diocese of San Joaquin they're gearing up for a special convention to elect a provisional bishop this coming Saturday. Fr. Jake has a good "round up" of the scoop on that -- as does the new website for the Episcopal Diocese of San Joaquin. It is indeed a new day dawning for that diocese!

"In other news" the Global South Steering Committee met just before Holy Week and posted their "reflections" on Easter Monday. Not really any surprises there -- same old saber rattling -- but, as one email correspondent offered, "Frankly, I saw the GS primates' statement as very hopeful. They are becoming increasingly desperate -- only the desperate feel the need to issue public threats." We shall see. Mark Harris offers his usual thorough job of examining the primates' "messing about with Anglican identity" -- and while you're over there at PRELUDIUM, check out his piece on the future-or-lack-thereof of the Anglican Communion Network: Goodbye Network?

Finally, for today, a sad and sober note amidst the glow of Easter are these reports from Nigeria about escalating violence targeting LGBT people in general and our Changing Attitude Nigeria allies in particular.

A shocking story of mob violence has emerged which almost culminated in thedeath of one of the leaders of the Changing Attitude Nigeria (CAN) group inPort Harcourt. The violent attack occurred in the context of the funeral ceremony being held for the sister of Davis Mac-Iyalla, attended by six members of the Port Harcourt group on Thursday, 20 March 2008.

The CAN Port Harcourt leader who was the subject of the attack said:“I am in total shock and living in fear while feeling the pains I suffered inthe hands of a mob group that attacked me at the Service of Songs for Davis’s late sister. While hymn singing was going on a muscular man walked up to meand asked me for a word outside the compound.

“The next thing I saw was a mob group who were there to attack me. They started slapping and punching me, kicked me on the ground and spat on me. I have never known fear like I knew when they were brutalizing me. I thought they were going to kill me there and then. While beating me they were shouting: ‘You notorious homosexual, you think can run away from us for your notorious group to cause more abomination in our land?’ Those who attacked me were well informed about us so I suspect an insider or one of the leaders of our Anglican church have hands in this attack.”

I remember well when Davis MacIyalla was here in Pasadena last month, listening to him speak of his grief at not only the death of his sister but at the fact that he would not be safe to go back to Nigeria in order to be present at her memorial.

As we continue to celebrate the Good News of the Risen Lord -- of the triumph of life over death and the promise of God's love made available to all -- let us not forget there are those within our own Anglican Communion who live in fear for their lives simply because they have been willing to tell the truth about who they are.

And let's roll up our sleeves and get back to work to change that.

Alleulia. Alleluia!
Posted by SUSAN RUSSELL at 8:35 AM

This sounds much like the Pharisees who questioned CHRIST about his ignoring of the Jewish laws.

When we CHRISTians start acting like Pharisees, it is time to re-evaluate our goals and our calling. Yes, those are awfully strong words, but if we are not acting in accord with CHRIST, then whom are we acting in conjunction with? And is it helping our spiritual path to do so?

As to this article:
http://akinolarepent.wordpress.com/2008/03/24/gay-man-attacked-at-mac-%20iyalla-funeral/

Susan: One other thing that you may have missed was the passing of Ronald Haines, the former bishop of Washington (DC). He was a great leader, and someone who walked a transformational journey in regard to the holiness of LGBT people. He appointed the first openly gay woman to be a priest in that diocese (at my former parish - Church of the Epiphany), and he also spoke publicly about his own son being gay. These things were not easy or straightforward for him, but he walked the walk of Christ's love.

I'll never forget that when I was received into the Episcopal church, at one point he held my head in his hands to give me a blessing, and I felt the power of the Holy Spirit enter and uplift me.

The stridency with which the non-global South and its Northern co-beligerents have been addressing the world is a sign of the soon to be end of the road. If they cannot bully Dr. Williams any farther, they have run out of ammo. Bp. Griswald is a very nice guy, and took the beating hostility they tossed at him constantly because he hates violence and prefered to simply take it rather than respond. Bp. Katherine for all her willingness to let others go to 'crucified places' is cut from different cloth. The game is up.