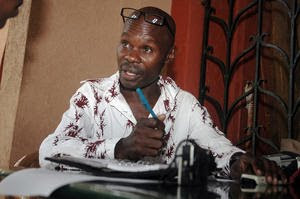 A Ugandan gay rights campaigner who last year sued a local newspaper which outed him as homosexual has been beaten to death, activists say. Police have confirmed the death of David Kato and say they have arrested one suspect. Uganda's Rolling Stone newspaper published the photographs of several people it said were gay next to a headline reading "Hang them."

Even more shocking, CNN reports that the editor of the paper disclaimed responsibility, saying, "When we called for hanging of gay people, we meant ... after they have gone through the legal process ... I did not call for them to be killed in cold blood like he was." Yet he was. Killed in cold blood. Yet another example of the power of violent words to incite violent actions.

The Human Rights Watch issued a statement calling for immediate investigation in Kato's death including this tribute to his work and witness by their senior Africa researcher:

David Kato’s death is a tragic loss to the human rights community. David had faced the increased threats to Ugandan LGBT people bravely and will be sorely missed.

So where's the voice of the church condemning this and other acts of violence against LGBT people? When will the Archbishop of Canterbury speak out on behalf of the voiceless victims of homophobia across the Communion he is so anxious to preserve? (And yes, this is the same article that included the name and photo of our friend, Anglican Bishop Christopher Senyonjo.)

If we -- all of us -- everywhere across this Big Fat Anglican Family of ours -- from Canterbury to Kampala to Kalamazoo -- spent more of our time speaking out for "the least of these" who are members of the Body of Christ and less of our time fretting about the institutional unity of the Anglican Communion maybe, just maybe, we'd make some strides in eradicating the scourge of homophobia and the kingdom would be a little closer to coming.

Prayers for David Kato. For the repose of his soul and for comfort to those who loved him and grieve his passing. May he rest in peace and rise in glory. And may we be given the grace to continue his work and witness.
Posted by SUSAN RUSSELL at 12:25 PM