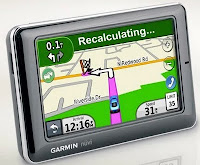 Yes, I'm still thinking about the whole GPS thing. The idea of "recalculating" as a key component on our journey is one that's been rattling around in my head ever since our "Excellent European Adventure" last summer ... and the sermon I preached about the GPS as a metaphor for how the Holy Spirit works in our lives.

And it's certainly been "front and center" for the last week as we've listened to the rancorous ramping-up of the rhetoric ABOUT rancorous rhetoric. It's what I thought about when I listened to these words from Keith Olbermann in his special commentary on the Tucson shootings:

"Violence, or the threat of violence, has no place in our Democracy, and I apologize for and repudiate any act or any thing in my past that may have even inadvertently encouraged violence. Because for whatever else each of us may be, we all are Americans."

In that apology Keith was recalculating his rhetoric and repudiating any language that might have -- inadvertently or otherwise -- encouraged violence. And in that moment I heard a call for us ... whatever our political, theological or ideological perspective .... to take a long, hard look at both the words we use and the way we use them. Not just some of us. All of us.

I do believe we are on a journey as a nation toward what has been called "a more perfect union." But we're not there yet. And I am convinced -- never more so that this week -- that in order to someday "arrive at destination" we must THIS day listen to the GPS calling us to recalculate our rhetoric.

Here's how my president -- our president -- said it last night in his knock-your-socks-off, grand slam, give-you-chill-bumps, pass-the-Kleenex speech/sermon from the University of Arizona.

At a time when our discourse has become so sharply polarized - at a time when we are far too eager to lay the blame for all that ails the world at the feet of those who think differently than we do - it's important for us to pause for a moment and make sure that we are talking with each other in a way that heals, not a way that wounds.

To pause. To recalculate our rhetoric. And then to move forward again -- no less committed to the values that fuel our journey and feed our souls but equally committed to respecting the dignity of those who disagree with us -- and to finding ways to challenge their perspective while honoring their personhood.

Tall order? You betcha. If we're honest I think every single one of us has a list of people we would happily take a "get out of the baptismal covenant free" card if there was such a thing. Which there is not. Instead there is the call to respect the dignity of EVERY human being ... and the challenge to recalculate our rhetoric when it falls short of that core baptismal value.

And there is a story we know that tells us how to meet that challenge:

An elder Native American was teaching his grandchildren about life. He said to them, "A fight is going on inside me. It is a terrible fight and it is between two wolves. One wolf represents fear, anger, envy, sorrow, regret, greed, arrogance, self-pity, guilt, resentment, inferiority, lies, false pride, superiority, and ego.

The other stands for joy, peace, love, hope, sharing, serenity, humility, kindness, benevolence, friendship, empathy, generosity, truth, compassion, and faith."
"This same fight is going on inside you, and inside every other person, too," he added.
The Grandchildren thought about it for a minute and then one child asked his grandfather, “Which wolf will win?"

The old Cherokee simply replied ... "The one you feed."

The one we feed will win.

So which one will we feed? Which rhetoric will we applaud, tweet, "share" and repeat? Which candidates will get our support, our contributions and our votes? The ones who continue to polarize, victimize and demonize or the ones who are willing to pause -- to reflect -- to recalculate?

We hear a lot about the "new normal" these days ... and maybe, just maybe, that "new normal" can become about more than just a changed economic reality that challenges us to rethink old paradigms and expectations. Maybe it can be about refusing to feed the wolf of polarization, victimization and demonization within us. And to challenge our politicians, our pundits and ourselves to recalculate our rhetoric. To -- in the words of President Obama's tribute to Christina Taylor Green -- "do everything we can to make sure this country lives up to our children's expectations."

Ready. Set. Recalculate.
Posted by SUSAN RUSSELL at 10:29 AM

I'm a bit skeptical of the evenhandedness of this approach. The truth of the matter is that there was a level of discourse that invoked armed and violent rebellion against the Government and its officials emmanating from the far right and those running for Congress. To tone down the vitriol may allow a more socratic debate but don't expect reason to prevail in our political rhetoric just yet.

@musculars -- I think what I'm wondering is if we "recalculated" and heightened our expections of civil discourse around differences the far right fringe would end up self-isolating and being marginalized. Bascially let's cut off the oxygen to their fire.

And yes, it's a little idealistic. But as a mentor of mined taught me years ago: if you don't have a target, you can't miss.