The Rose Parade is behind us, the Rose Bowl game is yet to kick off so am doing some New Year's Day blog surfing ... and came across this great piece by our friend-across-the-pond Giles Fraser ... which I'm subtitling "Fun Facts to Know & Tell About the King James Bible." Published in 1611 it is celebrating its 400th birthday ... check it out ... and BRAVO, Giles!! 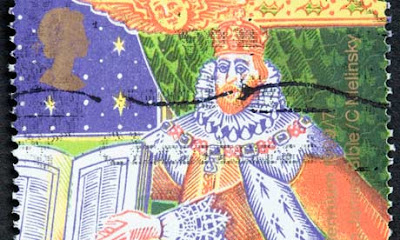 Have a guess who said this: "We are a Christian culture, we come from a Christian culture, and not to know the King James Bible is to be, in some small way, barbarian." No, it's not former archbishop George Carey complaining again about Christianity being marginalised in modern Britain. In fact this is Richard Dawkins, lending his support to next year's 400th anniversary of the King James Bible. Fans of the feisty atheist need not worry that their hero has gone soft. "It is important that religion should not be allowed to hijack this cultural resource," he added. I had a little chuckle at that one. Religion? Hijacking the Bible? Whatever next.

Except, of course, that is precisely what the KJB was: an attempt by the Church of England to control the religious and cultural agenda. A team of academics was established in 1604 to translate the Bible in such a way that it bolstered the authority of the established church. James I gave the specific instruction that the translation must toe the official line on the importance of bishops. The Greek word ekklesia was to be translated as "church", rather than "congregation" or "assembly" – the translators thus giving the impression that the Bible proposes a top-down form of ecclesiastical authority. James insisted no notes were to be made in the margins of the text; it was in this dangerous commentary that the previous, more radical Geneva Bible had dared to question the divine right of kings.

Next year cultural Britain is set to go "Bible bananas", as the Telegraph recently put it. The King James Bible will be everywhere, feted alongside Shakespeare as one of the formative influences on the English language. We are going to be reminded, repeatedly, of those phrases of everyday use that originated with the KJB: "am I my brother's keeper?"; "all things to all men'; "the salt of the earth". In this there is much nostalgia for some golden age of dignified public speech. But even at the time of its publication, there was something artificial about the KJB's use of language. The use of "thou" had almost disappeared from common use by 1611, as had words ending in -eth: their reintroduction was part of a deliberate strategy to invoke historic authority.

Perhaps this is why the KJB had a lukewarm reception. Lancelot Andrewes, a leading light of the translation project, rarely used it in his preaching. And Hugh Broughton, then one of England's leading Hebrew scholars, loathed it: "It is so ill done. Tell his Majestie that I had rather be rent in pieces with wilde horses, than any such translation, by my consent, should bee urged upon poore churches." Little wonder some of the translators were a bit embarrassed about their creation. When Richard Kilby preached at the funeral of his fellow translator Thomas Holland in 1612, he made no mention of the KJB as being among Holland's achievements.

The explosion in popularity of the KJB came much later, in the mid-18th century, and was driven by a restoration nostalgia for the mythic romance of Stuart monarchy. Indeed, what really delivered the KJB into the cultural bloodstream was things like Handel's Messiah, the libretto for which was a compilation from the KJB by the deeply conservative non-juror Charles Jennens.

It is quite true that the translation trips off the tongue with style and elegance. And that's because it has always been about performance – it was designed to be read aloud in church, where its meaning could be controlled (as opposed to studied at home). Hence early editions were vast tomes, to be placed on a lectern – unlike the tiny Tyndale Bible, made pocket-sized because it was contraband, banned by the church. When it comes to Bibles, size matters.

Throughout 2011, a myriad of cultural events are planned to celebrate the KJB. And rightly so. It marks an influential turn in our cultural history. What will be irritating, however, is all those who want to make a fetish of the text itself: American fundamentalists who think it is the only acceptable translation – "the Bible fell from heaven in 1611"; windbag actors intoning thees and thous in a knowing sonorous baritone; public school bores who couldn't care two hoots if the Bible is a faithful translation just as long as it's the one they remember from chapel. The Bible needs saving from all of these.
Posted by SUSAN RUSSELL at 12:13 PM

I too found Giles' comments fascinating.

I am of the opinion that the refusal to do the history of the Bible, not any failure to do theology or develop a single unified hermeneutic (Dr. Williams' particular fantasy) is the great problem of the church.

If instead of the "falling from heaven in 1611" vision or the equally amusing ideas of some, the actual formation and content were commonly understood, we would be halfway to unity.

Of course we would loose those who think the 39 assertions are holy writ, the fundies, those who think a pope wrote the work and some others. But then mayhap not so great a loss as an evangelism opportunity.