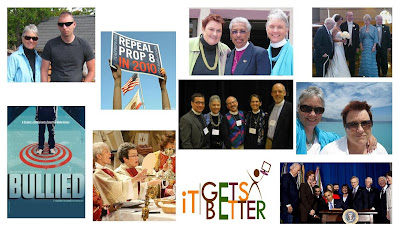 Another year is almost in the books -- so for my last-blog-of-2010 here (in relatively chronological order) is my "year-in-review, top-ten-from-2010:" a mix of personal, political & prophetic moments that stand out from a year "well done" -- with best wishes for a VERY Happy New Year!

In April, my son Jamie was promoted to sergeant in the U.S. Army ... making his mom very proud -- and very grateful he's stationed in Kentucky rather than Kandahar!
A huge highlight was a weekend-long visit from the Right Reverend Barbara Clementine Harris -- first woman bishop in the Anglican Communion and a TOTAL force of nature.

In May we celebrated two new bishops as +Diane Jardine Bruce and +Mary Douglas Glasspool put two more cracks in the stained glass ceiling and opened a new era of mission and ministry in the Diocese of Los Angeles.

June was the month of Louise and Susan's Excellent European Adventure: Arguably the best vacation in the history of travel!

Presenting the work of the SCLM C056 Task Force to the House of Bishops in Phoenix in September was truly a great privilege -- as is the ongoing work of implementing GC Resolution C056 creating and collecting resources for the Blessing of Same Gender Unions.

In October the It Gets Better campaign "went viral" offering hope and encouragement to LGBT youth at risk ... and Bill Brummel's brilliant documentary Bullied debuted -- a project that will continue to change hearts and minds around the country in the months to come.
December 2010 was my 23rd Diocesan Convention -- and I was honored to be elected to represent my hometown diocese as a Deputy to General Convention 2012.

And finally -- on December 22nd DADT was finally repealed -- another step forward on "the gay agenda" (AKA "liberty and justice for all.")
Posted by SUSAN RUSSELL at 9:59 PM