Another "inch at a time" in the journey toward marriage equality 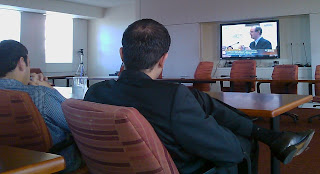 It wasn't exactly a "front row seat" but I did manage to get myself to the Federal Court Building here in Pasadena [pictured left] where they were showing the Prop 8 hearing at the 9th Circuit Court of Appeals this morning.

Scheduled for two hours, the hearing was supposed to be one hour each of arguments about "standing" -- whether those appealing Judge Walker's ruling have the standing to do so -- and about "constitutionality" -- basically the merits of the case ruling Prop 8 unconstitutional.

There are lots of sites with live-blogs, transcripts, verbatims and video clips. Here are a few I recommend if you want all the scoop:

Prop 8 Trial Tracker -- has both background and analysis, including this interesting bit about pro-Prop 8 attorney Cooper and the questioning about the "word" (that would be the "M Word" AKA "marriage.")

Judge Smith focused a couple times on whether the State of California was in a worse position for having passed Prop 8 because it has given all of the same rights and privileges under the auspices of the domestic partnership statute. In other words, if we are only fighting over a word, and no substantive differences at the state level, aren’t we essentially creating a subclass? And roughly transcribed, here’s what Cooper said:

I actually think this was a big moment of the oral argument. It said that yes, the anti-equality forces were there only to “put down” gays and lesbians, or as San Francisco Deputy City Attorney Therese Stewart said:

Stewart: If the word is the institution, then the argument is just that gays and lesbians would “stain” the institution. The fact that Prop 8 is symbolic, it makes the insult obvious. This is classification for its own sake, and it violates the equal protection clause. Taking these components together, it infers animus. If we only passed Prop 8 to show that same-sex couples aren’t as good, or as worthy as other couples, then isn’t the equal protection argument plain to see?

"The appeals court appeared inclined to resolve the case narrowly, along the lines of a 1996 Supreme Court case that struck down a Colorado constitutional amendment that had prohibited state and local governments from passing laws to protect gays and lesbians from discrimination."

And if you're looking for a great summary analysis, Shannon Mintner does an excellent job over on Karen Ocamb's blog, ending:

Together, Ted Olson and Terry Stewart were a great team and did a great job of presenting the most powerful arguments for upholding Judge Walker’s decision. Olson laid out the big picture and urged the court to issue a far-reaching holding that would apply to all fifty states, and Stewart gave them the option of striking down Prop 8 on narrower grounds, based on the unprecedented circumstances of its passage and of California law.

I have to admit, one of my favorite moments of the whole two-plus-hours was Ted Olson taking on the assertion used by Yes on 8 during the 2008 political campaign that Proposition 8 was necessary to prevent children from becoming prematurely occupied with sexuality.

Olson: “If that was a justification, it would equally warrant banning comic books, television, video games and conversations with other children.”

The other was when one of the attorneys arguing for marriage-discrimination was making his case about society's interests being served by preventing single mothers from raising children and one of the justices basically said, "Great argument against divorce but not working for me in the gay marriage department."

So what happens next? The 9th Circuit Court could rule tomorrow. They will not. It will likely take weeks or more and no matter what they rule somebody will appeal it somewhere.

But today was another "inch at a time" kind of day. Let us rejoice and be glad in it!
Posted by SUSAN RUSSELL at 3:54 PM