Dear Sarah, What WOULD Jesus Do?

No, I shouldn't be bothering to blog about this as it [a] only draws more attention to the pathetic state of political discourse in this country right and now and [b] the Christmas countdown clock is now hours instead of days and there's still LOTS to get done.

However. I can't resist.

Yesterday the story broke that Sarah Palin (erstwhile Governor of Alaska and would-be political pundit) had her knickers in a twist over the White House Holiday Greeting Card. This would be the card: 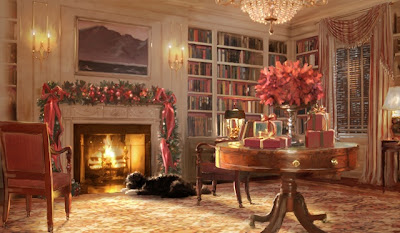 "It's odd," Palin told FOX News Radio, asking why the card focuses on the dog instead of traditions like "family, faith and freedom."

Well, maybe it's odd to Ms. Palin but -- as noted on the "Business Insider" -- this year's White House card follows a long line of cards that "focused" on snow, buildings, fireplaces ... even a piano. In fact, the Bush White House (2005) sent this card with not one but two dogs ... and the sentiment: "With best wishes for a holiday season of hope and happiness." 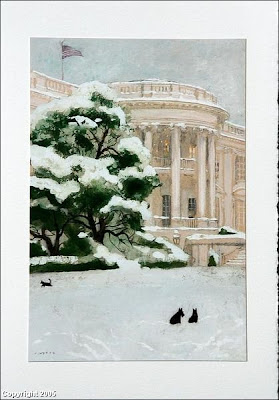 Seen in that wider trajectory [pictured here] this year's card falls firmly in "the tradition" of White House Cards Through the Years.All of which kind of begs the question: So Ms. Palin asked herself "WWJD" on the day after the GOP Congress put unemployment insurance for Americans most in need and tax increases for the middle class on the altar of partisan politics and the answer she got was "take pot shots at the White House Holiday Greeting Card?" Seriously???

The best gift Ms. Palin could bring Baby Jesus this Christmas is to stop making him look bad -- especially so close to his birthday!
Posted by SUSAN RUSSELL at 11:50 AM