Rick Perry's 31 Seconds of Shame: The gift that keeps on giving 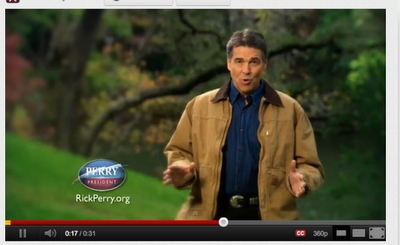 A lot has been written -- including by me -- about Rick Perry's offensive-in-so-many-ways video ad posted just a week ago tomorrow. My Huffington Post piece is up to over 500 shares/70+ comments (nowhere near the Kim Kardashian record, but hey ... ) and the YouTube video itself is over 4 million hits with 20,300 likes and 648,866 dislikes. That's a lot of attention to a 30 second spot. But no one summed it all up like +Gene Robinson in his Washington Post piece entitled "What Rick Perry gets wrong about religion" ... which opens:

"Rick Perry would be pathetic, if he weren’t so infuriating."

Episcopal Cafe has a great round up of many of the parodies of Perry's 31-seconds-that-will-live-in-infamy ... including this observation:

One of the beautiful things about the Internet is that if you're as far off base as Perry, you can be the recipient of (instant and red-hot) feedback. And if your message is as far out so as to lend itself to parody, you best thicken up your hide.

But here's another observation: The response this week to the Perry video is actually a great illustration of the Advent Admonition to "keep alert" ... to "stay awake" ... to "pay attention."

Because it turns out a lot of people were paying attention to the teachable moment of Rick Perry's ill-advised effort to bolster his failing campaign by bashing gays in the military, perpetuating the "war on religion" myth and generally making Christianity and Jesus look really bad.

There are a lot of folks stepping up to offer powerful (and sometime playful) rebuttals to Perry's "crackpot Christian" perspective -- including the video clips over at ECafe and Bishop Robinson's piece in the Washington Post. And I have had the opportunity through the Huffington Post platform to engage with some fascinating conversations with commenters around faith, the Bible and reconciling sexuality and spirituality.

Stay awake. Pay attention. Keep your lamps trimmed and burning -- and your iPads charged and churning. Great Advent themes playing out in teachable moments as we wait in expectation for the coming of the One who loved us enough to become one of us in order to show us how to walk in love with each other.

I'm still not ashamed to admit that I'm a Christian, but you certainly don't need to be in the pew every Sunday to know there's something right in this country when people of faith who recognize 31 seconds of "shinola" when they see it who step up to say so ... turning a travesty into a teachable moment.
Posted by SUSAN RUSSELL at 9:25 PM

This past Sunday, our priest said something during his sermon I really enjoyed:

"If there's an attack on Christianity, I think it's likely to have been an inside job."

Well, it's off topic - for which I ask forgiveness - but I'm curious as to what you think of the conflict between the Occupy Wall Street folks and the people who actually own Wall Street - or at least the land underneath the buildings that line it.

(Their headline, not mine)

The displaced occupiers had asked the church, one of the city’s largest landholders, to hand over a gravel lot, near Canal Street and Avenue of the Americas, for use as an alternate campsite and organizing hub. The church declined, calling the proposed encampment “wrong, unsafe, unhealthy and potentially injurious.”

And now the Occupy movement, after weeks of targeting big banks and large corporations, has chosen Trinity, one of the nation’s most prominent Episcopal parishes, as its latest antagonist.

“We need more; you have more,” one protester, Amin Husain, 36, told a Trinity official on Thursday, during an impromptu sidewalk exchange between clergy members and demonstrators. “We are coming to you for sanctuary.”

Trinity’s rector, the Rev. James H. Cooper, defended the church’s record of support for the protesters, including not only expressions of sympathy, but also meeting spaces, resting areas, pastoral services, electricity, bathrooms, even blankets and hot chocolate. But he said the church’s lot — called Duarte Square — was not an appropriate site for the protesters, noting that “there are no basic elements to sustain an encampment.”

There's more, of course. If you were Trinity's Senior Warden or Rector, what would you do?