We gave thanks for the life of Ed Watson today 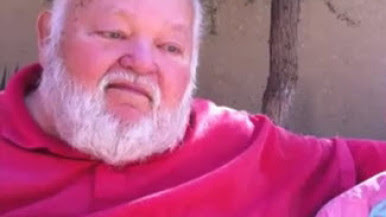 Ed Watson died Wednesday at the age of 78.

His partner of over 40 years, Derence Kernek, was at his side when he succumbed to complications from the rapid-onset Alzheimer’s he was diagnosed with just last year.

Kernek and Watson videotaped a plea to the 9th Circuit in March, asking that the court allow Walker's ruling to take effect so they could marry while Watson could still remember their 40-year relationship. If you missed it in March you can still watch it here:

All Ed wanted to do was marry Derence before he passed or lost the ability to even remember who he was on their wedding day. But he died before that dream could be realized while the court hears arguments about whether tapes should be released and whether Judge Walker's verdict should be vacated because he's gay and might or might not want to marry someday. Of course, none of that matters to Ed and Derence now.

It should matter that this couple who built a life together for over 40 years and loved each other -- in sickness and in health until death did they part -- had none of the protections for their relationship that come automatically to opposite sex couples before the ink is even dry on the marriage license. To Britney Spears and Jason Alexander for 55 hours. To Kim Kardashian and Kris Humphries for 72 days. To Newt Gingrich and ... (all three times.)

But not to Ed Watson and Derence Kernek. And because of their inability to marry, Watson had been denied coverage under Kernek's retirement plan causing incredible financial hardships. The L.A. Times reported that after Ed's death Derence could not be reached for comment -- because their phone had been disconnected.

The arc of history bends toward justice -- and I believe with all my heart that it is bending toward marriage equality. I trust that we WILL become a nation where equal protection equally protects all Americans -- as the Constitution intended. And I know that someday our children and grandchildren will look back on this struggle over whether gay and lesbian Americans have the right to marry with as much disbelief and dismay as we look back on the arguments over whether American women had the right to vote or African Americans had the right to sit at lunch counters.

But someday isn't today. And so today -- at All Saints Church -- we gave thanks for the life of Ed Watson in the Prayers of the People. And we prayed for comfort for Derence Kernek. And we recommitted ourselves to the struggle to make justice roll down like waters for all the Eds and Derences out there waiting for "liberty and justice for all" to include them.

O God of grace and glory, we remember before you this day our brother Ed. We thank you for giving him to us, his family and friends, to know and to love as a companion on our earthly pilgrimage. In your boundless compassion, console us who mourn. Give us faith to see in death the gate of eternal life, so that in quiet confidence we may continue our course on earth, until, by your call, we are reunited with those who have gone before. Amen.

Posted by SUSAN RUSSELL at 7:00 AM

It hurts to read this entry. And I am with you: I think we are moving toward marriage equality, and there will be a day when the generations to come will scratch their heads and say, "No way?!" when they hear about the insanity and the pain LGBT couples have had to endure.
May light perpetual shine upon Ed, and may this injustice add to the weight that will tip the scales in the other direction one day.

Time to find out who administers that retirement plan and start embarrassing the hell out of them.