Think it can't get worse? 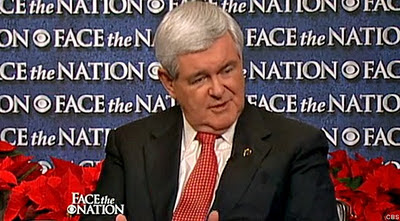 In a story being widely reported this morning, Newt Gingrich on Sunday hammered at the nation’s judiciary system, saying that if a court’s decision was out of step with American popular opinion, it should be ignored. There’s “no reason the American people need to tolerate a judge that out of touch with American culture,” Gingrich said on CBS’ Face the Nation.

Host Bob Schieffer asked Gingrich how he planned to enforce that. Would you call in the Capitol Police to apprehend a federal judge, he asked. “If you had to,” Gingrich said. “Or you’d instruct the Justice Department to send the U.S. Marshall in.”

Seriously??? Like those judges so "out of step with American culture" that they ruled for Brown and against the Board of Education in 1954 ending segregation in our schools?

One can only hope he wins Iowa and then follows President Huckabee into well earned obscurity.

Here's hoping SOMEONE has taken a civics class in this country.

As smart as he thinks he is, Gingrich has a propensity for making statements that may appeal to the GOP primary voter but would not, I hope, play well next fall. Those whose rights have been won in federal court should find Gingrich's attack on the courts repugnant.

Yeah, right. Newt is a bloviator. It's sad that so many find that impressive.

And is it too late for the Democrats to refuse to accept Bush v. Gore?