And then there are the families just trying to have a life ...

Here's another L.A. Times piece ... this one about a family I know from when they were active in the Diocese of Los Angeles before they moved to "the Inland Empire:" 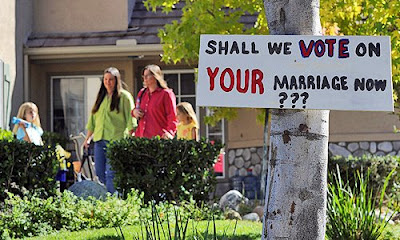 Frustrated by the passage of Proposition 8, the measure banning same-sex marriage, Lorian Dunlop walked outside her Murrieta home and nailed a sign to her tree.

"Shall We Vote on Your Marriage Now???" it asked.

It was a rare act of defiance for Dunlop and her spouse, Darcie, who have spent the last four years living a quintessential suburban life in a quiet neighborhood where they felt safe and secure.

But the battle over same-sex marriage changed all that. They attended local rallies against Proposition 8 where people in passing cars hurled insults and anti-gay slurs. At home, their political signs were repeatedly vandalized or stolen.

They look at their community differently now. An edginess has crept in.

"I feel like we are in a hostile environment," Dunlop said, sitting in her living room. "More hostile than it was before." 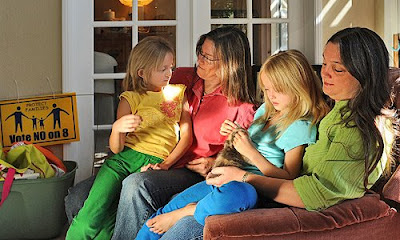 Read the rest here.
Posted by SUSAN RUSSELL at 7:25 AM

I absolutely agree with the sign. I was telling a straight but not narrow friend of mine that since the definition of marriage has been made law, I want to start a grass-roots movement to define it even narrower.To marry a man and woman must be of childbearing age,fertile and willing to raise children.Since men can continue to sire children most of their lives, once the wife passes menopause,the husband must submit to sterilization and must do the same if his wife dies.No marriage later in life for love and/or companionship.Do I sound bitter?I hope so.

Thanks for posting this article about us, Susan. We've only recently begun to recognize that our complacency and feeling "just like everyone else," was probably a bit unrealistic. I think it's important that we all do what we can to be more visible so that nobody in California continues to labor under the false impression that they don't know anyone who is gay, and can discriminate freely because "it really doesn't hurt anyone."

Bless you for all you do.

I can't help but think of the Biblical phrase: "Sow the wind, and reap the whirlwind."

Marriage is the ultimate conservative act, for same-sex couples.

Deny us marriage (or, in Arkansas, even adoption! :-0), fundamentalists of all stripes: don't you think we'll become MORE radical? MORE in-your-face? LESS likely to stay constrained the closet? MORE likely to SHOW you---and your children---that "We're here, we're queer, we're not going anywhere"? MORE disruptive of your fundy "religion"? (I won't dignify it w/ any term signifying the Nazarean Carpenter)

Sow the wind, and reap the whirlwind!

Thank you for posting the piece about Lorian and Darcie. Although I don't know them, I understand so well how they are feeling.

We are the only gay couple in a very small mission congregation in the Inland Empire. We were married in September (after ten years together), but everything about our wedding was carefully orchestrated so as not to cause offense to anyone who might not approve. We feel so isoated and marginalized. The election brought home in a very personal way how alone we are here.

We attended a rally at Redlands City Hall this evening and it was wonderful to stand in the streets with a couple of hundred people like us.