So I'm in Washington DC ... going to be meeting with interfaith allies on the HRC Religion Council for the next couple of days and attending the Transgender Day of Remembrance observance on Thursday night. 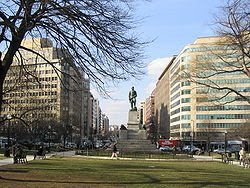 Here's the view outside my window ... Farragut Square ... in the center of the city. I'm heading up to the Nat'l Cathedral in a bit for a lunch meeting and then hoping to get a little down time before we start our work together tonight.

It was a happily uneventful "commute" from L.A. to DC yesterday ... sobering to take off over the L.A. skyline, however and see all the gathered smoke from the recent wildfires. Prayers continue to ascend for all those impacted by the devastation and for all those who stood in harm's way to protect lives and property.

Hustling through the St. Louis airport to make my connecting flight to Washington -- as I walked down the "C Concourse" I spied -- coming directly toward me -- a dapper man in a purple shirt. "My goodness, bishop," I said, "fancy meeting you here!" ... and put out my hand, which he took and shook, smiling. "Yes, yes, good to see you," he said. "I know your face, but your name ..." "Of course, of course," I said. "I'm Susan Russell from the Diocese of Los Angeles." "Oh, of course you are," said (wait for it ...) Jack Iker -- former bishop of the Diocese of Fort Worth. "Godspeed on this next part of your journey," I said. "Thank you," he said. (Here endeth the St. Louis Airport anecdote!)

So then I'm in my seat in the plane, waiting them to close the cabin door and tell us to turn off our cell phones, and I get a call from Janette Williams from the Pasadena Star News wanting comment about a story she's writing about two women who are going to walk from L.A. to San Francisco to protest Prop 8 writing discrimination into our constitution.

Of course I have an opinion on that -- which I give her (some of which ends up in her article published yesterday) -- trying to keep my voice down but how quiet can you BE crammed into seat 22B elbow-to-elbow ... next to the Brooks Brothers guy reading the National Review. Oh well.

The Rev. Susan Russell of All Saints Episcopal Church in Pasadena - which conducted same-sex weddings and hosted pre-election phone banks to drum up opposition to Proposition 8 - said Tuesday that the couple's march is more than just a symbol.

"It's exactly what people of faith should be doing - putting their faith into action ... taking the opportunity to stand up for one of the defining civil rights issues of our time," Russell said. "We hold these women in our prayers, and we think it's exactly the kind of action we'd like to see more of as we continue to battle the effort to write discrimination into our Constitution."

Four legal writs have been filed with the state Supreme Court to overturn Proposition 8, Russell said, but working through the legal system is only one part of the opposition.

"I think everything we do is going to be effective" in fighting Proposition 8, she said. "As this couple takes a symbolic journey for justice, our prayers will move this state and this country."

Onward to Washington. Getting of the plane at Reagan National I run -- almost literally -- into conservative political commentator Amy Holmes. She's definitely one of those pundits-you-love-to-hate but it still sort of surprises me when you run into these folks "out in the world" standing in line for airport fast food like every other travel weary commuter.

My final report from yesterday's travelogue was being held up in traffic in the cab heading toward the hotel by a presidential motorcade coming out of 1600 Pennsylvania Avenue (AKA "The White House"). My very savvy cab driver -- who had already enlightened me on his perspective of Scott McClellan's indictment of the Bush Administration over the Valerie Plame scandal -- said dryly, "Must be taking a break from packing." (Yes, Toto, we TOTALLY aren't in Kansas anymore! :)
.
So there you have it. From LaLa Land to Inside the Beltway "an inch at a time."

Posted by SUSAN RUSSELL at 7:32 AM

Susan, I was taking my kids to school this morning in the 25 degree cold, and my daughter turns to me and asks, "Why don't we live in California where it's warm?"

Hope your stay here is pleasant. At least it's warmer in the District than in the 'burbs, especially when Congress is in session.

If your hotel is anywhere near a Metro stop, you'd be smarter to take Metro into DC rather than a cab. It's cheaper, too.

going to be meeting with interfaith allies on the HRC Religion Council for the next couple of days and attending the Transgender Day of Remembrance observance on Thursday night.

I thank you, for your witness re the latter...

...but perhaps you can appeal (through the Religion Council) to HRC: to NOT throw us TG people under-the-bus through EXCLUDING us from ENDA again? :-/

You should have given Amy a big smooch for helping make the right look so clueless.