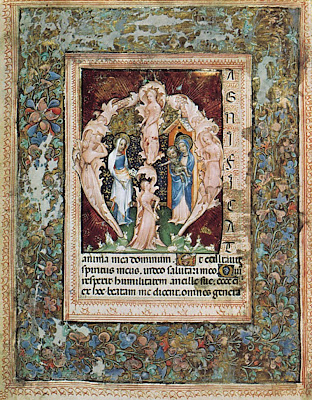 My soul proclaims the greatness of the Lord, and my spirit rejoices in God my Savior; for he has looked with favor on his lowly servant.

I grew up in the Episcopal Church here in Los Angeles. I learned to sing these words to the Magnificat – one of the scriptures appointed for this Fourth Sunday of Advent – as a Junior Choir member in a church that wouldn’t let me be an acolyte because I was a girl. I met my first woman priest in the 1980’s – a decade after the “irregular” ordination of eleven women in Philadelphia in 1974 opened the way for women in the priesthood in the Episcopal Church. And I remember the great drama that unfolded over those ordinations here in the Diocese of Los Angeles – including the four congregations who tried to leave the diocese (and take their buildings with them!) in protest.

And on December 4th & 5th I watched with awe as this diocese – my Diocese of Los Angeles – elected not one but two women as Bishops Suffragan to help lead us in our work and witness into the 21st century. My spirit rejoiced – in God my Savior and in Los Angeles, my diocese.

And I will never say “never” again.

Faced with the challenge of electing two new bishops from an extraordinary field of six deeply faithful, diversely gifted priests – including our own incomparable Zelda Kennedy – I watched with such deep gratitude as the careful, prayerful work that went into the months long discernment process unfolded. And in the end, when the last ballot was counted and the last declarations signed by the delegates and Bishops-elect Diane Jardine Bruce and Mary Douglas Glasspool stood together at the podium and led us in Evening Prayer I knew that we who were privileged to be part of that electing convention were also privileged to be witnesses to history.

The bishops-elect took very different paths to that historic moment. One was raised in the Roman Catholic Church and found the Episcopal Church as a young mother. The other was raised in the Episcopal Church as the daughter of a priest who disapproved of the ordination of women. Both are extraordinarily qualified to serve in both the pastoral and prophetic roles we expect in our bishops and both will be tremendous additions to the House of Bishops – where they will be the 16th and 17th women to be seated in that house after their May 15th consecrations.

As we come to the end of this Advent season of preparation we will open our hearts and our minds once again to the amazing mystery of the Word made flesh and dwelling among us in the miracle of the Christmas story. We will rejoice once again in the scandal of the incarnation – of a God who loved us enough to become one of us in order to show us how to walk in love with one another. And this year, let us rejoice as well that we belong to a God whose capacity to draw us into ever-widening understandings of peace, joy, justice, compassion and incarnation didn’t end in Bethlehem with the birth of Jesus. Or in Philadelphia with the ordination of eleven women priests. Or in Riverside with the election of two bishops-suffragan.

Let our souls proclaim and our spirits rejoice in both the challenges and opportunities ahead – for us, for All Saints Church and for this Diocese of Los Angeles -- as we watch and wait to see what our “never say never” God will do next!

[from Saints Alive -- the weekly newsletter of All Saints Church, Pasadena]

Posted by SUSAN RUSSELL at 6:25 PM

Let's be sure the Consecration has plenty of incense. Scripture clearly establishes God likes incense, which is a mark of honor. When we cense someone, we honor that person.