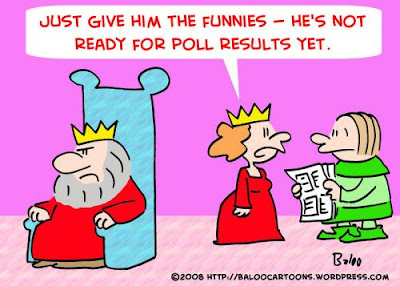 I know, I know ... polls are widely suspect, easily manipulated and often WRONG. Nevertheless, they are a finger on the pulse of at least the people polled ... and sometimes what's more interesting than the results are the questions being asked. At least to me.

First of all, there was this Gallup/USA Today poll, posted yesterday following the passage of the Health Care Reform bill -- which I'm filing under: What a difference a day makes!

WASHINGTON — More Americans now favor than oppose the health care overhaul that President Obama signed into law Tuesday, a USA TODAY/Gallup Poll finds — a notable turnaround from surveys before the vote that showed a plurality against the legislation.

And then there was this Harris poll -- as reported in the Baltimore Sun -- which I'm filing under: You've got to be kidding!

I also found of interest this observation by John Avlon, as quoted in the Sun article:

The full results of the poll, which will be released in greater detail tomorrow, are even more frightening: including news that high percentages of Republicans—and Americans overall—believe that President Obama is "racist," "anti-American" "wants the terrorists to win" and "wants to turn over the sovereignty of the United States to a one-world government." The "Hatriot" belief that Obama is a "domestic enemy" as set forth in the Constitution is also widely held—a sign of trouble yet to come.

Do I have any idea what all of this means? Of course not. I'm just a parish priest with a blog and an opinion or two.

But I'm also an American who loves this country and wants it to be the best it can be -- to rise to its full stature of a land of liberty and justice for all -- to be worthy of the sacrifices my son and thousands of others young Americans are making as they serve to protect the core values of our democracy from all enemies -- foreign and domestic.

I am the daughter of a staunch Goldwater Republican father who I guaran-damn-tee you is rolling in his grave at what has been done to his Grand Old Party.

And I am Episcopal activist who has spent the last 10+ years watching my church distracted from its mission and ministry by an Absolutist Agenda that has proved itself ready, willing and able to destroy (or attempt to destroy) whatever it can't control.

They say that those who don't learn from their past are doomed to repeat it. I think in these days of rapid change and challenge I'd add to that "those who don't pay attention to their present are doomed to be statistics." And the work we have to do -- the challenges we have to face -- are too great to allow ourselves to step back and let the Wingnuts take over this country the way they've tried to take over this church.

So now I'm getting back to the week-before-Holy Week details of life ... but I'm keepin' a candle burning -- literally and metaphorically -- for this country, for this church and for all of us to find ways to overcome the ignorance and fear which has so sadly become so much of our public discourse.

Kyrie eleison.
Posted by SUSAN RUSSELL at 10:31 AM

Holy God that second poll is terrifying! If that many are as deluded as it suggests, we are in for some dark times.

A significant number of the far right also believe that there is a concentration camp under Denver International Airport built and run by The New World Order.

As the previous president said, "Rarely is the questioned asked: Is our children learning?"

It appears the answer is "no."

I'm scared that it's only a matter of time before one (or more) of these nutcases makes an attempt on Obama's life.

I wouldn't even be surprised if something big is being planned for April 19, the anniversary of the Oklahoma City bombing.

It's going to come down to bloodshed. You can't reason with these people.

No, uffda, they're learning.

They're just learning how to be crazy.

LOL ~ in regards to the socialism aspect, I find the only people who don't accept Congress and the administration are socialists either a) aren't paying attention or b) choose not to accept it. It's not whether or not we are becoming a socialist country... it's whether or not socialism is the answer to all our problems. Some think it is & others don't; that's the heated debate between the far sides. But as far as denying the socialism movement; Obama, several of his advisors and several in Congress have been quite open and frank about what the plan is. All you really have to do is watch C-Span when Congress is in session. Cripes, my sister-in-law who is so liberal that she makes you (Susan) appear moderate-right even admits that the "fundamental transformation in America" is socialism.

The rest of the poll, however, (the antichrist & hitlet stuff) is quite silly if it weren't so scary. I guess it's human nature to over-react.

I'm sorry for commenting again; my multi-tasking skills are weakening with age :p

I just wanted to add that one of things that does surprise me is how many people think the move to socialism is an "Obama thing". Bush Jr got quite a few bills through for the transformation; he certainly didn't get as many through as he had hoped, but unlike what some on the far-right want to believe, "government takeover" (strictly for a lack of better terminology on an empty stomach) was a large part of his presidency.

And what do we call those people who feel that taxpayers should pay a significant portion of the cost of health care for Wal-Mart, the richest corporation in the history of the planet?