Continuing to riff on the baptismal promise to "Proclaim by word and example the Good News of God in Christ Jesus" here's some great news about Voices of Witness Africa ... a video proclamation of that Good News in the words and witness of LGBT Africans:

Yesterday at the 2010 Episcopal Communicators conference, "Voices of Witness Africa" won a Polly BondAward of Excellence.

So let's pause for a moment of: Bravo/a! Well Done! Well Deserved!

And if you're NOT familiar with "Voices of Witness," there's no time like the present to get the "backstory:"
. 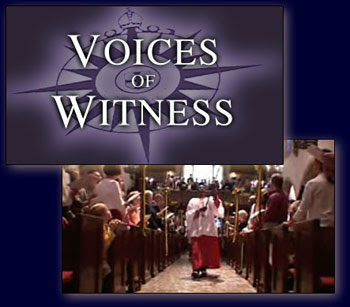 After the 2003 election of +Gene Robinson as Bishop of New Hampshire, Claiming the Blessing launched an education initiative focused on listening to the voices of the LGBT faithful (and their straight allies!) in the Episcopal Church.
.
From the promo material on Voices of Witness (2006):

We believe that telling these stories, sharing these witnesses, is a gift we have to offer – and we believe that there has never been a more important time for us to commit ourselves to offering that gift in a way it can be the most widely received throughout the church and the communion. -- Susan Russell, Executive Producer

The documentary premiered in Columbus at the 2006 General Convention to wide acclaim ... including a 2007 Polly Bond Award of Excellence to Louise Brooks as producer ... and a study guide was commissioned to empower and encourage congregational conversations on the voices of witness presented in the film.
.
Building on the Voices of Witness "brand," Claiming the Blessing members Katie Sherrod and Cynthia Black teamed up to produce "Voices of Witness Africa." 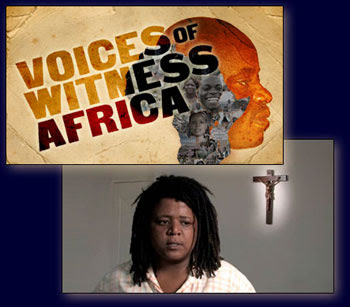 Anglican men and women from across the continent tell their stories of intolerance and community, of secrecy and hope, of facing challenges and seeking dignity as people of faith who are gay, lesbian, bisexual or transgendered.

Archbishop Desmond Tutu called the documentary "A brave tribute to a God of love" -- and now it has received a WELL deserved award of excellence for producer Katie Sherrod & director Cynthia Black from Episcopal Communicators.
Information on both documentaries is available online on the Voices of Witness website. Voices of Witness Africa also has a Facebook Fan Page.
So kudos to ALL involved in these continuingly important tools for telling the good news, for offering voices of witness, for proclaiming by word and example the Good News available to absolutely everybody! (And if you want more info on the videos or study guides or setting up a screening in your community or congregation, just email me and I'll fix you up!)
Posted by SUSAN RUSSELL at 10:53 AM