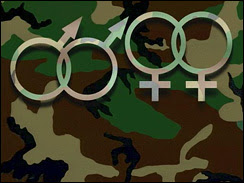 (Reuters - source link) - U.S. military chaplains will be allowed to officiate at same-sex weddings under new guidelines following repeal of the "Don't Ask, Don't Tell" policy on gays serving openly in the military, the Pentagon said on Friday.

A chaplain may participate in or officiate at any private ceremony on or off a military installation as long as the ceremony is not barred by state and local laws, the Defense Department said in a statement.

Chaplains do not have to officiate at ceremonies that go against their religious tenets, it said.

The repeal of the Defense Department policy that barred homosexuals from serving openly in the military -- known as "Don't Ask, Don't Tell" -- took effect on September 20. More than 14,000 U.S. service members were thrown out under the rule, which dated from 1993.

The new guidelines said that decisions on the use of military property should be made on a "sexual-orientation neutral" basis, the statement said.
Posted by SUSAN RUSSELL at 11:19 AM