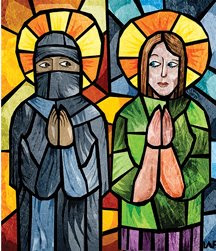 Posted by SUSAN RUSSELL at 7:36 AM

I remember that American Catholic nuns after Vatican 2 came to a realization that their religious garb impeded their engagement with
the people of God. I do wish Western Muslim women would do the same. And of course its ludicrous for non Muslim Western women usually, government officials to don the veil even in Muslim lands. Even Queen Rania doesn't wear the veil in Jordan

Seriously? On 9/11 an icon of the power of prayer to transcend differences elicits a comment on how Muslim women "ought" to dress?

As the Anglican Digest used to say ... "Makes the heart sad."

Of course, I speak from the POV of a genderqueer . . . but coerced (to say nothing of compulsive!) gendered clothing, of ANY ideology or culture, is harmful IMO.

I have no problem w/ a faith tradition's belief in "modesty" in clothing. But it shouldn't be gendered. If women need to cover their hair, then men should need to, too (and vice-versa!) [And I think that (public) facial masks of ANY sort, on adults, are unacceptable in an open society. No niqabs OR Klan hoods!]

I think we can have a mature discussion of these issues that do not single out a single religion/ideology, if we work at it. OCICBW.

The woman on the left is praying to Allah, which is Muhammad's 1st choice god.

The woman on the right is praying to the God of the Bible. (Islam deems her an Infidel.)

As you know, at the time of Muhammad, Jews & Christians rejected Islam because it's pagan idolatry. Moon god, Star gods,(see Islam flag), sun god, etc. - Muhammad popularized his religion by picking 'the greatest god', The Moon god,[Allah] and getting rid of the other lesser gods. (no great feat really.) But doing that did not fool the Jews nor the Christians.

re all who don't call Allah 'God', Muhammad said:

"Muhammad is God's Apostle. Those who follow him are ruthless to the Infidel, but merciful to one another." Quran48.29

"whoever changes his Islamic religion, kill him." Hadith9:57

"I have been ordered to fight the people till they say -- none but Allah." Al Bukhari4:196.

I read your icon quite differently, both women regard each other in an expression of wariness emphasizing difference rather than transcending it.

Islamaphobia may well be the title of it. After 9/11 a fear of Islam is well grounded. American Muslims do well in allying those fears by engaging their neighbors and co workers. I simply agree with the reality that Catholic nuns acknowledged that they had a choice to visually set themselves apart from the larger community or to visually become a part of that community.

The origins and even present day manifestations of such clothing carry a meaning that can quite escape us. White gloves worn by waiters at fancy banquets originated because plantation owners didnt want to see black hands serving them.

The niquab covers the whole of a woman's body because it is an object of shame.
Wafa Sultan is a Syrian/American described how she was taught that her body was filthy! "I remember hearing as an eight year old girl that a woman is nothing but shame! Her marriage will cover up one-tenth of her shame and her grave will cover the rest of it. Can you imagine, at eight, being consumed by shame just because you are female?"

I am so sad to see so much judgment and so much ignorance. How hard would it be to cherry-pick the Bible for similar verses encouraging the slaughter of the "other" ? Especially if those verses are taken out of context?

In a free society, people should be free to make their own choices regarding their dress, their faith, and their practice. Limitations on anyone's behavior are appropriate only to the extent that that behavior does active harm to others -- not to coerce people into behaving in ways that are comfortable for me.

"O God, the Father of all, whose Son commanded us to love our enemies: Lead them and us from prejudice to truth; deliver them and us from hatred, cruelty, and revenge; and in your good time enable us all to stand reconciled before you; through Jesus Christ our Lord. Amen."

At the risk of belaboring the point I have come to believe as have many that there are serious cultural and theological divides between Islam and the West that are not as easily bridged as we would like.

As in Chritianity patriachal notions are more than well rooted and as I've already noted sexual repression seems to be one of the religion's hallmarks - Islam has hardly a favorable attitude towards homosexuality. And while Christianity hasn't fared much better in its attitude, its response has been defanged,(at least in the West).
One need not quote or misquote ancient texts to critisize Islam as its expression today provides more than enough material for criticism. And the manical murderous response to such criticism we have witnessed has not lessened my concern.

Islam manifests itself as a political totalitarian ideology and/or as a religion of transcendance. In the former, we engage as we would an enemy.
In the latter Islam would only prosper and grow from criticism and interaction and engagement with its detractors or the uneducated.

A phobia, for example “Islamaphobia” (sic), is by definition “an exaggerated usually inexplicable and illogical fear” and is the opposite of well-grounded.

Many Americans said after Pearl Harbor, a fear of Japanese persons is well-grounded.

But no one said, after Oklahoma City, that a fear of white Americans with Scottish ancestors is well-grounded. No one said that presidential candidate John McCain has the same “Mc” in his name and ethnic makeup as mass-murderer Timothy McVeigh. No one said we must be fearful of Scottish-American military veterans.

Even the Supreme Court just ruled that skin color is not a predictor of future behavior. Nor is religion or sexual orientation.

BTW. Allah is simply the Arabic name for God. Just as there are English, Greek, Latin, Aramaic, Spanish, etc. names for Jesus.

Pray for Peace. Work for Justice.

To be fearful of an ideology that inspires the artistry of evil in the deliberate suicide and murder of thousands of civilians is not reacting in an exaggerated, inexplicable, nor illogical manner.
So by the correct definition as given by uffda51, Islamophobia is not something most people are experiencing because the fears of of Islam and its values inimical to Western values are very well grounded by real and frightful events.

How to respond to those fears can be a rational and logical discussion but to choose not to defend against, to delimit, or confront but to appease those that partake in such an ideology would be by far more inexplicable and illogical.