BREAKING NEWS: Susan G Komen proves "It's never too late to do the right thing." 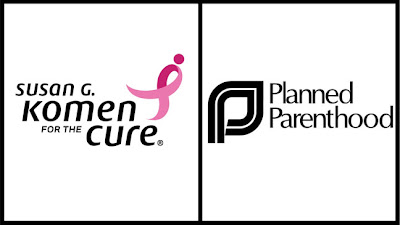 The Susan G. Komen Foundation announced this morning the reversal of their decision to end funding breast cancer screening through Planned Parenthood ... demonstrating that the power of public outrage can actually overcome the anti-abortion zealot driven politicization of women's health issues.

From the statement issued by the Komen Foundation:

We want to apologize to the American public for recent decisions that cast doubt upon our commitment to our mission of saving women's lives. The events of this week have been deeply unsettling for our supporters, partners and friends and all of us at Susan G. Komen. We have been distressed at the presumption that the changes made to our funding criteria were done for political reasons or to specifically penalize Planned Parenthood. They were not. Our original desire was to fulfill our fiduciary duty to our donors by not funding grant applications made by organizations under investigation. We will amend the criteria to make clear that disqualifying investigations must be criminal and conclusive in nature and not political.

Which of course illustrates that the decision to defund Planned Parenthood was indeed "political" as it was based on an "investigation" which was politically motivated and a strategic part of an ongoing agenda of attacking Planned Parenthood and making women's health issues a wedge issue in a presidential election year.

So what's that quote? Oh yeah ... "It's never to late to do the right thing." And if there's a silver lining in this whole sorry mess it has been the elevation of the issue of access to women's health care for underserved populations to the top of the news -- for a moment -- with the good news of a victory against the politicization of health care.
Posted by SUSAN RUSSELL at 9:03 AM

I'm not at all convinced that this was the "right thing," as noted here: The Komen administration's statements are inconsistent with each other, and they still have not approved the Planned Parenthood application for funding next year.

Interesting link, Paul, but after decades in the non-profit grant world, I don't read the statement "Preserve their ability to apply" through the same alarmist lens as the blogger in point. That's pretty much grant-speak as usual ... and I suspect after this massive #fail on the PR front they'll be very clear that their granting process is being watched very carefully by those committed to egalitarian access for women's health care.

Nice try, Komen. But now that I know you have been spending donor dollars to: 1) Lobby against healthcare legislation that would give poor women access to healthcare and strengthen patients' rights; 2) Sue small nonprofits for using the words "the Cure" for their events; and 3) Pay your employees huge salaries while spending less than 20% of the money you raise on breast cancer research----you will never get another dollar from me for ANYTHING. My money is going to Planned Parenthood and other organizations that actually care about women's health.

No progressive should give them a single cent. I hope they sink like the Titanic.

Komen has been lobbying against healthcare legislation for women since the Clinton Administration:

The Marketing of Breast Cancer

Please spread the word about this. Our precious dollars should not be spent to fund the covert anti-woman activities of what is really little more than a right-wing front organization.