In His Own Words: President Barack Obama on his not-even-remotely phony faith 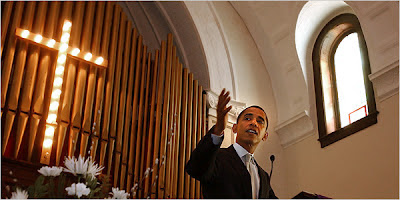 (RNS) In recent days, GOP presidential candidate Rick Santorum has criticized President Obama for having a "phony theology" not based on the Bible, and prominent evangelist Franklin Graham has said he does not know if Obama is a Christian.

"You have to ask him. I cannot answer that question for anybody," Graham said Tuesday (Feb. 21) on the MSNBC program "Morning Joe." On the other hand, Graham said that he believes Santorum is a Christian because "his values are so clear on moral issues."

Even as a significant percentage of Americans falsely believe Obama is Muslim, the president has spoken of his Christian faith with increasing fervor during his three years in the White House.

Here's a sample, in reverse chronological order, of five of Obama's most personal statements on Christianity:

Read them all here.

This was my favorite:

"I didn't become a Christian until many years later, when I moved to the South Side of Chicago after college. It happened not because of indoctrination or a sudden revelation, but because I spent month after month working with church folks who simply wanted to help neighbors who were down on their luck no matter what they looked like, or where they came from, or who they prayed to. It was on those streets, in those neighborhoods, that I first heard God's spirit beckon me. It was there that I felt called to a higher purpose -- His purpose."

Posted by SUSAN RUSSELL at 9:40 PM