Reflections on The Feast of Saint Oscar of Hollywood 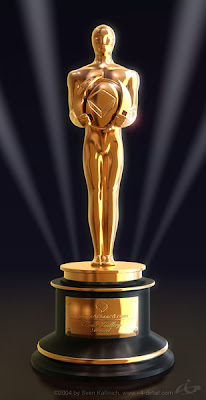 Yes, L.A. is an "industry" town and so Oscar Day really is a big deal here.

It's not only about glitz and glamour and who wore what. Around here it's also about road closures and traffic alerts and how to get across town on Sunday without getting gridlocked by limos. But more than than, it's also about our local economy and jobs for everybody from the catering trucks servicing the location shoots to the lights-camera-action people to the publicists, ad agencies and theater owners to the "stars" themselves.

And then -- for me -- there's the "family angle" to Oscar Night. I didn't just grow up in L.A. -- I grew up in a family where "the industry" was our industry -- it was our family business. My dad worked for Metropolitan Theaters ... an L.A. based, family owned company that ran a chain of theaters including the great old movie palaces in downtown L.A.: The Los Angeles; The Orpheum; The Palace.

My parents actually met when my dad came back from "The War" and returned to the job he'd left when he enlisted in December 1941: Manager of the Los Angeles Theater on Broadway between 6th & 7th. My mom -- who had come west to Los Angeles from her native Minnesota soon after graduating from high school in 1943 -- was the Head Usherette and, as the family story goes, they disliked each other at first sight. So of course before long they were "an item" and eventually she went from Usherette to Cashier to Mrs. Manager ... because that's how it worked in the 50's. 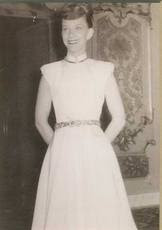 Here's a picture I have of my mom in the lobby of the Los Angeles ... probably 1948 or 1949 ... decked out in her "greet the patrons" best. (Yes, it was another era altogether.) Anyway ... so I grew up with a daddy who went to work in a tuxedo and as far as I could tell, his job was to stand in the lobby and talk to people. And eventually he went from manager to district manager ... and then it was about bookings and ads and out of town previews and ... well, suffice to say movies were our family business.

And so I remember "Oscar Night" being a big deal for us ... because based on which picture won what there'd be much last minute shuffling around with newspaper ads and decisions about what was going to run in which theater.

Lots of folks would come to watch the Oscars at our house ... and in the den there would be a couple of long, folding tables set up with newspaper tear sheets ready to glue in ad copy and then have the designated driver schlep down to the night editor who would be waiting for it. There'd be an Oscar pool ... and I felt ever so grown up when I got old enough to put in my dollar and guess the winners. And every once in awhile we'd have a personal stake in one of the nominees -- my dad's army buddy Davey Quaid would be up for an editing award or someone married to someone's brother would know the art director on another. I know I mentioned L.A. is an industry town, but it can actually be a pretty small town in some ways. Yes indeed, Oscar Night was definitely a Major Feast Day in our family! 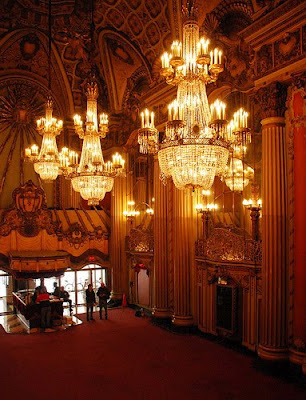 And all of that was a long time ago in what seems like a galaxy very far, far away. Talking about managers in tuxedos in lobbies with chandeliers instead of video games in a time before multiplexes and Netflix is hard to even imagine. And yet it all kind of came rushing back to me last night when we were watching the Oscars with friends in Santa Monica and I listened to Billy Crystal talking about how "we all grew up watching movies in movie palaces."

And I thought, "No, 'we all' didn't, Billy. You and I did -- maybe. But my kids ... hardly kids at 30 & 27 ... didn't. The majority of the folks gathered at the Santa Monica Oscar Party we attended last night didn't. In fact, those of us who remember those halcyon days of movie palace yesteryear are closing in on dinosaur status ... as anachronistic as the black & white silent films our own parents described in their "back in the day" stories.

And yet, the art of movie making lives on. The power of cinema to move us, change us, challenge us, engage us ... to make us laugh and to make us cry ... continues in spite of the changes and challenges of venues, formats, contexts and constituencies. Maybe at the end of the day what makes the movies great has less to do with how we experience them than that we experience them. And maybe, just maybe, underneath all the glitz and glamour and silliness of celebrity, Saint Oscar of Hollywood actually has something to teach the church about the challenge of moving beyond a "movie palace mentality" that seduces us into idolizing our buildings as monuments to the past rather than reimagining them as instruments for mission for the future.

Because the mission of the Gospel lives on. The power of the Good News of God in Christ Jesus to move us, change us, challenge us, engage us ... to make us agents of love, justice and compassion ... continues in spite of the changes and challenges of venues, formats, contexts and constituencies. Maybe at the end of the day what makes that Good News powerful has less to do with how we experience it than that we experience it -- and then that we invite others to come and do likewise!
Posted by SUSAN RUSSELL at 1:01 PM

In the day-- my brother and I would take the bus 5¢ and go to the movies 10¢ -- see two features or one and a serial (keep 'em coming back) and cartoons and the news. A whole afternoon of delight.

Thanks, Susan for a wonderful and pertinent observation — especially here in England, with our marvellous buildings in every community and the challenges of seeing them as they could be rather than as shrines to yesteryear.