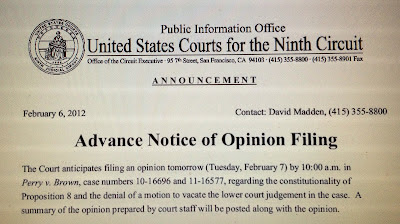 Just a few minutes ago, the 9th Circuit Court posted this announcement that they will file their ruling on the Prop 8 case tomorrow, February 7th, by 10:00 a.m.

Tomorrow’s ruling will be another step toward putting California back on the right side of marriage equality history and undoing the shameful act of allowing a bare majority of voters to write discrimination into our constitution.

At All Saints Church in Pasadena we have taken the principled stand of refusing to participate in state sponsored discrimination by signing marriage licenses for some couples until we can sign them for all couples. We are hopeful that tomorrow’s decision will not only return marriage equality to California but will return to our clergy the ability to equally minister to all those in their pastoral care. Justice has been both delayed and denied – it’s time for it to roll down like waters and end marriage discrimination.
Posted by SUSAN RUSSELL at 10:42 AM

I am praying that the Holy Spirit move the principals involved toward God's Will and the light of justice. Amen.

Prayers ascending that equality for all will be restored in California.