Begging to differ with the Bishop of Christchurch 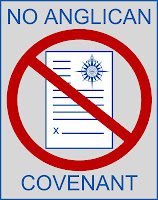 It's a REALLY busy day in this corner of the kingdom and I seriously don't have but a few minutes to respond to the latest episode of "As The Anglican World Turns" as the Anglican Consultative Council meets in New Zealand.

This quote from yesterday's ACNS release begged for at least a quick follow up:


"Bishop of Christchurch the Rt Revd Victoria Matthews told delegates at the Anglican Consultative Council (ACC) meeting today that she thought there were two Anglican Communion Covenants: one in people’s heads, the other the one written down."

What I think is actually going on here is that there are two Anglican Communions: one in Bishop Matthews' head and the other one that has actually read, marked, learned, inwardly digested and rejected the proposed Anglican Covenant.

And -- loathe though I am to say "I told you so" -- this is exactly what we get for not managing to suck it up in Indianapolis and give a firm "NO" to the proposed Anglican Covenant from the Episcopal Church. I was honored to the proposer of GC2012 Resolution D007 urging its rejection and what I said in the hearing in Indianapolis is just as true today:


Despite protestations to the contrary, the proposed Anglican Communion Covenant attempts to create a centralized authority that would constrain the self-governance of The Episcopal Church and other churches of the Communion. This unacceptably inhibits Communion churches from pursuing the gospel mission as they discern it.

You will hear this evening from a variety of voices speaking from a variety of perspectives on this issue, and I come to speak as a traditionalist. Our scripture and our tradition tell us to value the ideal of covenant while our reason tells us to reject this proposal lest we throw out the baby of historic Anglican comprehensiveness with the bathwater of hysteric Anglican politics. Like a wolf in sheep’s clothing, the proposed Covenant is nothing less than coercion in covenant clothing – and I urge its rejection.

One of my most memorable GC2012 moments came from a senior deputy from the Diocese of North Carolina who -- in a hearing on another matter -- sagely observed: "Where I come from we have a saying that goes 'When the horse is dead, dismount.'"

This horse is dead -- and it is LONG past time to dismount and quit wasting our precious time and resources when there are so many critical Gospel issues calling for our response.
Posted by SUSAN RUSSELL at 11:25 AM

Methinks a splinter of the dead wood that is the Anglican Covenant has lodged itself in +Herself's mind which is blurring her vision.

Didn't Jesus say something about leaving the dead to bury the dead?

Yes, Elizabeth, as I recall Jesus DID say something about leaving the dead to tend to themselves. Had something to do with following him instead. The proposed Covenant is dead, and what's more it's a weight, and a right heavy one at that, about the collective neck of the Communion. The faster we can untether ourselves from this dry jurdicial process, the faster we can move on - to richer relationships and possibilities.

I knew the vote at GC would come back to bite us. How I wish we had taken a stand on a firm NO to the covenant with our sister, the Scottish Episcopal Church.

Y'all gave it a mighty try, and I thank you for that.

Just chalk it up to Ian Douglas: The Gift Who Keeps on Giving!

Having just read Diarmaid Maccullough's History of Christianity, I am well aware that when we write down what union means for the sake of order, we split the Church. We lost the whole of the Eastern Christianity due to Chalcedon. Will we further divide the Church to make Christianity irrelevant to the world with another misunderstood attempt at unity? Communion must be fluid in order to be practiced. When we make divisions to expedite administration, we don't have Communion. We have an 'in-group'. We have Rome. We have something to protect rather than something we live out in the freedom of Christ.

I hear they don't like her in Christchurch -- the historical cathedral which has always been the city's icon -- is being torn down rather than repaired. She has been at war with many clergy there as reported in NZ papers. Then again, she came from Canada and perhaps does not know the lay of the land. She is probably just as much in her own bubble on the covenant.

I must disagree with Matthew. I live in the diocese to the south of Christchurch. While I am opposed to Bp Matthews on her view of the Covenant, I greatly admire her work in the earthquake stricken city. She has had to front the practical decision to deconstruct the cathedral even against death threats. Most Anglican worshippers support her in this matter. I would think any opposition from clergy would be the enclave of Gafconites supported by Sydney which have always been a thorn in the side of that diocese.