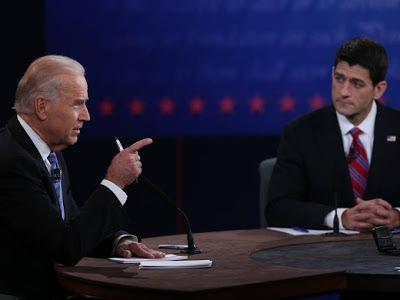 The New York Times editorial summed it up for me:


Vice President Joseph Biden Jr. would not sit still for a parade of misleading and often blatantly untruthful descriptions of the state of the economy and the Republican prescriptions for it. Though his grins and head-shakes were often distracting, he did not hesitate to interrupt and demand an end to “malarkey.” The result, expertly controlled by the moderator, Martha Raddatz of ABC News, was both entertaining and enlightening.

On Friday morning, MSNBC's Richard Lui asked for "your most memorable moment" via twitter and I sent:


Best #debate moment: Hands down Biden defending a woman's right to choose #msnbc2012 (Although, "So now you're Jack Kennedy?" was a close second.)

And my favorite tweet from last night came from Hilary Rosen:


Joe Biden won not because he was aggressive which he was - but because he didn't let Ryan get away with making stuff up.

In the post-mortem this morning the best the GOP seemed to be able to muster was that Biden was "disrespectful" -- when the real disrespect was Ryan's continued refusal to give specifics about how their tax plan adds up (because it doesn't) and his continued repetition of debunked untruths.

One of his favorites is the myth that the Obama administration "stole" from Medicare to fund Obamacare -- AKA "The $716 Billion Question" -- which FactCheck.org clarifies here:


“Republicans claim the president’s $716 billion “cuts” to Medicare hurt the program’s finances. But the opposite is true. These cuts in the future growth of spending prolong the life of the Medicare trust fund, stretching the program’s finances out longer than they would last otherwise…It’s true that experts, including Medicare’s chief actuary, doubt that some of those spending cuts will actually be implemented. But if they are, Medicare would spend less each year than it had been expected to otherwise, allowing Medicare to stretch further the income it receives from payroll taxes and premiums.”

That's just one example -- and it's an important one. But more importantly it goes to the pattern of the Republicans in this race to keep restating their opinions as fact and hope that the American people "buy it" without giving us specifics.

The stakes are too high, the challenges are too great and the work of rebuilding this country on the other side of the Bush Administration Debacle is too important to leave it to "trust us -- the details are behind the curtain in Box #2. This isn't "Let's Make A Deal" -- this is "Let's Elect A President."

Finally, whoever you think won or lost the debate (and I think it totally went to Biden) the really winners were the American people who actually got some clarity about the relative positions of the campaigns on everything from a woman's right to choose to on privatizing social security to getting us out of Afghanistan.

The one thing Paul Ryan got absolutely right was the moment when -- toward the end of the debate -- he noted that this was about "what kind of country we're going to be." And if we want to be a country where women lose the right to choose, where Social Security is privatized and Medicare becomes a voucher program, where the rich get richer and the middle class pay more taxes, where same-sex couples continue to have their marriages marginalized by the federal government as the war in Afghanistan continues to take American lives then go ahead -- vote Romney/Ryan.

But after last night's debate don't say he didn't warn you.
Posted by SUSAN RUSSELL at 10:01 AM