My guy did not come out swinging and the other guy did. I was frustrated by what I saw as one opportunity after the other for President Obama to set the record straight as Mitt Romney threw out one stale-dated sound bite after another in an orchestrated effort to Etch A Sketch away the policy positions that put him behind in the polls.

I'm starting to wonder if the issue wasn't that the President was prepared to debate the Romney we've been listening to for 18 months ... not the one who showed up last night. Seriously ... how do you prepare to rebut arguments that have nothing to do with the policies they've been campaigning on? It's like a sick combination of bait-and-switch and whack-a-mole!

I thought maybe it was just me, until I read this. From the New York Times editorial -- "An Unhelpful Debate" in today's paper:


Virtually every time Mr. Romney spoke, he misrepresented the platform on which he and Paul Ryan are actually running. The most prominent example, taking up the first half-hour of the debate, was on taxes. Mr. Romney claimed, against considerable evidence, that he had no intention of cutting taxes on the rich or enacting a tax cut that would increase the deficit. That simply isn’t true.

And here's a Facebook exchange from this morning that pretty much sums up my position:


Question: I was not able to watch the debates last night. Pundits claim it a slam dunk for Romney. Issues of "truthiness" aside, who do you think "won"? I am really curious to know what we common folk think.

Answer: I guess I can't put "truthiness" aside so I'm not sure I can "play" this one. Romney's debate performance was to genuine political discourse what reality television is to genuine reality. Do you "win" a debate by repeating debunked, fact-checked talking points over the moderator you bully into silence? Seriously. Did Romney dominate? Absolutely. Does than make him a "winner" any more than Charlie Sheen dominating the news cycle awhile back made him a "winner?" I don't think so. Whoever won the debate the ones who lost were those hoping for mature, effective discussion of the issues that challenge the American people in this election year.

There's lots more I could say but I have a stewardship campaign to get materials to the printer for, a new member class presentation to prepare and a pile of other work I need to get as soon as my "lunch break" is over. All that said, here are a few of my favorite "pictures worth 1000 words" making the rounds. 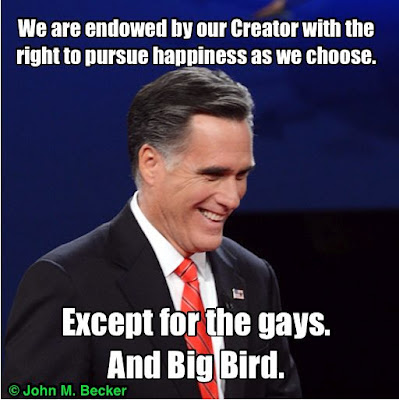 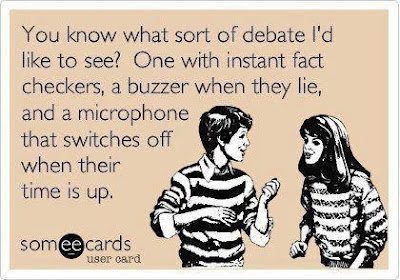 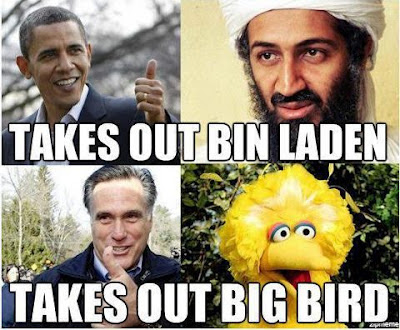 Posted by SUSAN RUSSELL at 1:37 PM