And now, a word from our Primate .. 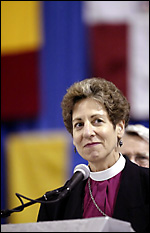 The Living Church reports "Presiding Bishop Katharine Jefferts Schori has been allotted two sessions of next month’s primates’ meeting to describe The Episcopal Church’s response to the Windsor Report. Sessions on the “listening process,” the proposed Anglican Covenant, and the Archbishop of Canterbury’s Panel of Reference, as well as social and development issues are on the agenda for the Feb. 12-19 meeting to be held at a hotel near Dar-es-Salaam, Tanzania ..."

Once again, the speculation-run-rampant prior to the meeting of the primates comes to naught.

"There'll be a boycott."
There isn't.

"They'll seat an "alternative primate."
They're not.

"They're going to tell her what to do."
She's got the floor.

And on it goes. Imagine what we might to accomplish together if instead of prognosticating on primatial politics (since we mostly seem to be wrong anyway!) we spent it instead on the work of the church -- MDGs, VBS, UTO, NEAC or ERD ... just pick something and DO it.

Maybe we'd get the answer to a variation of the universal question: If David Anderson cries "schism" in the forest and nobody's listening does the church still split?
Posted by SUSAN RUSSELL at 7:36 AM

Well, since he "likes a good fight" maybe he's sneaking his boxing gloves in with the hope it will make a difference...not.