I'll be back on the "As the Anglican World Turns" beat again tomorrow when the House of Bishops gathers for consider the "therefores" for the Episcopal Church. Honest.
.
But today it was All-Saints-All-The-Time as our rector, Ed Bacon, announced the most recent developments in the IRS v All Saints Church saga. Background on the over-two-year-old case is online on the All Saints website and here's what the Los Angeles Times had to say:
.
Pasadena church wants IRS apology
All Saints' rector also demands that the agency clarify its findings after closing its probe into an antiwar sermon in 2004.
. 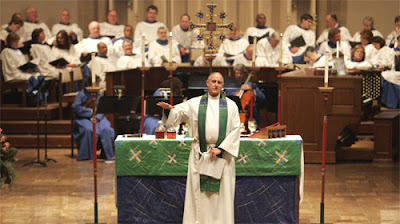 The rector of a liberal Pasadena church today demanded an apology and a clarification from the Internal Revenue Service after being notified that the agency had closed a lengthy investigation of the church over a 2004 antiwar sermon -- but also found that the same sermon constituted illegal intervention in a political campaign.

The Rev. J. Edwin Bacon Jr., rector of All Saints Episcopal Church, told congregants during morning services today that he and other officials were relieved that the church no longer faced the imminent loss of its tax-exempt status, but were bewildered by the IRS' seemingly contradictory conclusions about the case. 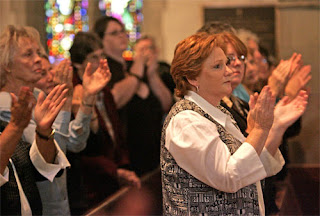 All Saints has "no more guidance about the IRS rules now than when we started this process over two long years ago," Bacon said. He said the lack of clarity from the IRS in its recent letter to the church would have a continuing "chilling effect" on the freedom of clerics from all faiths to preach about core moral values and such issues as war and poverty. Parishioners at this morning's early service applauded his comments.

Bacon said the unclear outcome could mean future investigations of the church.All Saints, one of Southern California's largest and most liberal congregations, came under IRS scrutiny after a sermon two days before the 2004 presidential election by a guest speaker, the Rev. George F. Regas. In the sermon, Regas, the church's former rector, depicted Jesus in a mock political debate with then-presidential candidates George W. Bush and John F. Kerry.

Regas did not instruct parishioners whom to support in the presidential race, but his suggestion that Jesus would have told Bush that his preemptive war strategy in Iraq "has led to disaster" prompted a letter from the IRS in June 2005 stating that the church's tax-exempt status was in question.Federal law prohibits tax-exempt organizations, including churches, from intervening in political campaigns and elections.

In its latest letter to All Saints, dated Sept. 10, the IRS said the church continues to qualify for tax-exempt status but that Regas' sermon on Oct. 31, 2004, amounted to a one-time intervention in the 2004 presidential race. The letter offered no specifics or explanation for either conclusion, but noted that the church did have appropriate policies in place to ensure that it complied with prohibitions on political activity.Jesse Weller, an IRS spokesman, said late Saturday that he could not comment on the case.

In addition to its requests for clarification and an apology, All Saints has asked a top Treasury Department official -- its inspector general for tax administration -- to investigate what the church described as a series of procedural and substantive errors in the case, including allegedly inappropriate conversations about it between IRS and Justice Department officials.

Those conversations, documented in e-mails obtained by the church through Freedom of Information Act requests, appear to show that Justice Department officials were involved in the All Saints case before the IRS made any formal referral of it for possible prosecution, an attorney for the church said. And they raise concerns that the IRS' investigation may have been politically motivated.


"In view of the fact that recent congressional inquiries have revealed extensive politicization of [the Department of Justice], my client is very concerned that the close coordination undertaken by the IRS allowed partisan political concerns to direct the course of the All Saints examination," attorney Marcus S. Owens wrote in a Sept. 21 letter requesting an investigation.

Also on the story were:
CBS News
Episcopal Life
.
Here's what the press coverage looked like at All Saints today: 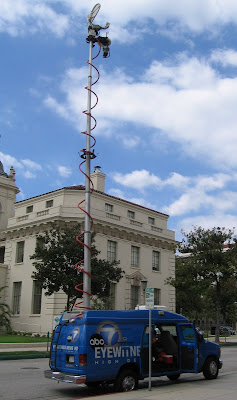 There were five of these news vans outside ...

... as the rector did the press conference thing
(surrounded by interfaith leaders and the All Saints vestry) ... 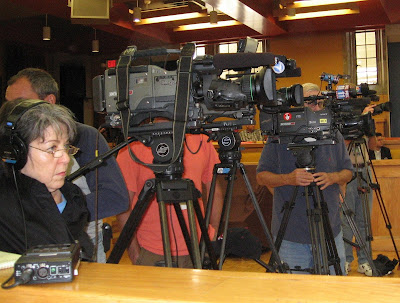 Stay tuned for further reports as they devlop. And now, back to our regularly scheduled schism ...

Posted by SUSAN RUSSELL at 4:24 PM

I look forward to seeing the DoJ and IRS investigate the evangelical cheering squads down in the south who support Bush.

Or the Roman Catholics who attacked Kerry.

The fact that we never heard about the "evangelical cheering squads" and the Roman Catholics being investigated was always proof for me that our investigation was punitive and political rather than a just enforcement action. Although the IRS was willing to go away without any sanction, I am glad that our leadership did not accept that. This administration has trampled our civil liberties and ignored our laws. We need them to be accountable.

I agree with anonymous. I have participated in several district choral festivals that were held in Baptist Churches for space concerns. While adjudicating a solo/ensemble festival (in an Adult Sunday School room, I noticed a signed photo of Pres. Bush and a thankyou to the class for its support.
Kevin Davis
Mobile, AL

The IRS IS the devil. We have churches in Flint, Michigan where Baptist preachers openly endorse candidates for local, state and federal offices from the pulpit and the IRS turns a deaf ear. Most likely this is because the endorsement of candidates is cultural among the African-American community and the IRS steers a wide berth.
Don't know what your racial makeup is, but your leadership appears mostly white (that's a guess and I apologize if I'm wrong) therefore the IRS no doubt feels free to attack.
I may not agree with All Saints, but I will defend her right to preach whatever they want from the pulpit. This is America afterall and unless, and until, the current Administration dismantles the Bill of Rights your church, my church, their church should be free to express themselves in any way they want without interference from Big Brother.

A sinner saved by God's Grace.